Cheryl Head is a fresh voice whose mysteries include references to diversity and tolerance, in addition to humor and good plot twists. This is all on display in her new book, Wake Me When It’s Over, the second in her Charlie Mack Motown Mystery series.

The new book is set in Detroit as Charlie Mack’s team of investigators is hired to try to head off any attempts at terrorism during the annual Detroit Auto Show. The book is full of rich characters, a good plot and surprises.

Cheryl Head is originally from Detroit but now lives in Washington, D.C. Before writing this series she worked as a writer, television producer, filmmaker, broadcast executive and media funder.

Cheryl, herself a women of color, explores race as part of the mysteries, which feature Charlie Mack, who is black and a lesbian. At one point, for example, a character notes she does not know why terrorists might attack but is “glad that Mack woman is in charge of this. Because in America, I know black people have way more experience with terrorism than white people.”

Her first book in the series, Bury Me When I’m Dead, was a finalist for the 29th annual Lambda Literacy Award for Lesbian Mystery.

Cheryl was kind enough to let me interview her via email.

Scott Butki: How did this story develop? 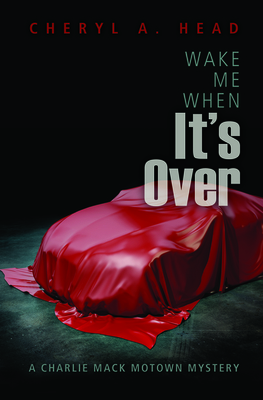 Cheryl Head: I’m a real fan of the mystery/thriller genre.  I read quite a bit of it (but there are so many good novels I’m finding it hard to keep up) and I love to watch movies/TV programs in the genre.  I lived in Detroit almost 40 years. I’m quite aware of the city’s influence of my world view on culture, politics, social issues as well as how the city has shaped my personality.  There are cultural events in Detroit that have always brought together a broad cross-section of people who live in the region-one of those events is the North American International Auto Show; known by most as the Detroit Auto Show. It’s a big deal in the city…and in the automotive world. Since my books are set in the mid 2000’s in Detroit, I began doing research on the 2006 Super Bowl.  Detroit had a huge opportunity with the Super Bowl XL to promote a different view of the city at a time when it’s reputation was dismal. It occurred to me that the auto show, a month before the world’s spotlight turned on Detroit for this global sporting event, would be a temptation for people who are up to no good, to create serious mischief. That’s how Wake Me When It’s Over came to be.

SB: What kind of research did you do for this book? Had you been to the auto show before?

CH: Yes, I’ve been to the Detroit Auto Show many times.  Growing up in Detroit, it was the place where anyone could go and see the best cars in the world, and dream about owning one.  The Auto Show brings in three-quarters of a million people during its run, but it also feels intimate. You can touch the cars, see the latest concept cars, breathe in the new car smell, feel the power as you sit behind the steering wheel of a truck. I did a lot of online research on what models and technology were available in 2006. I spoke to a former convention executive to hear what goes into producing a show of this scale, and I made a visit to the area around the Cobo Convention Center, the home of the Detroit Auto Show. Cobo has undergone massive renovation in the last five years, but the area around it wasn’t different, and the show’s general schedule, hype, and activities haven’t changed. What was of great interest to me, and became a plot point in the novel, was 2006 was the first time a Chinese automaker had exhibited at the Detroit Auto Show.

SB: The press materials for your book says you often have “themes of diversity in the broadest sense, acculturation and tolerance, sometimes with a bit of danger and always with a lot of humor, food and music.” I love that. Why did you decide to include those themes in your book?”

CH: I believe race and class are still critical elements of the American story.  I’m also an African-American woman of a certain age, and my experience has been colored (no pun intended) by how I am perceived by the people I interact with in life.  I believe my work as a writer is to provide a fuller picture of what it means to be a person of color in America. I have consciously chosen this path, and my goal is to do this without being didactic. I’m also a lesbian and that brings with it further perceptions, and misconceptions, by people I see, meet, and speak with. I know tolerance and civility and empathy are the values our country needs to embrace right now, and I think that comes with knowing, more intimately, the stories of people who are not like us. I’m writing fiction but my characters are composites of people I know or have witnessed. On humor, food, and music?  You don’t grow up in Detroit without having a street Ph.D. in all those subjects.

SB: What made you decide to use fiction as a way to explore these and other ideas?

CH: I’ve been a non-fiction writer most of my adult life.  I worked in public TV and radio for more than 30 years in Detroit and Washington, D.C., writing scripts, news stories, proposals, magazine articles, reports to Congress, that kind of thing.  I’ve always been a storyteller. I was working as a national executive in public broadcasting when Ken Burns produced his acclaimed documentary series on World War II. What I was struck by at the time was WWII stories always seemed to focus on the heroic acts of courage in battle. Of course, those dramatic stories are important, but those were not the stories I’d heard from my father, and others in the black community, about their WWII experiences. Their stories were of faithful service far away from battlefield glory. Their courage was exemplified in their steadfastness and pride in doing a good job in a segregated, and discriminatory, U.S. military environment.  Regardless of their uniforms or ranks, they were often relegated to a second-class status. I wanted to tell the story of black, U.S. soldiers-men and women-whose acts of valor were carrying out their duties under those demoralizing conditions. That’s why I wrote Long Way Home: A World War II Novel. I self-published this book, I couldn’t find a publisher who would take it on at the time. It went on to become a double finalist in the Next Generation Indie Book Awards in the African-American Literature, and Historical Fiction award categories.

SB: What do you hope readers will take away from these books?

CH: First, and foremost, I hope readers of my books will be entertained. I really do laugh at myself, I don’t take myself too seriously, and I want readers to see and enjoy my writing where it pokes fun at various aspects of the human condition. Not every situation has glimpses of humor, but many do. I also hope to reveal the power of empathy. I often acknowledge to myself that I am writing for white readers. That was certainly the case in Long Way Home.  I wanted to provide an insider’s look at what it’s like to grow up as a black person in rural America in the 1940’s. In my Charlie Mack Motown Mystery Series, I hope I’m attracting a broad audience. Not just readers of lesbian fiction (that’s the primary audience of my publisher) but readers who like a complex mystery or thriller. I want to create a puzzle about how human nature and human frailty can create chaos, and then proffer a world in which an African-American woman can be the protagonist in solving these puzzles.

SB: Can you talk about the work you do around diversity? Is it as a speaker, a writer, an organizer?

CH: My diversity work has changed since I formally retired from my corporate work. Before, I was a regular speaker about the merits of a diverse workforce. I wrote position papers, and funded media projects with a focus on diversity and inclusion.  As a volunteer, I’ve been an organizer and board member for organizations doing diversity work. Now I consult, formally and informally, on diversity activities including writing diverse characters, serving as a so-called “sensitivity reader”, and employee recruitment.

SB: I understand you serve as the Golden Crown Literary Society Director of Inclusion. Can you say more about what that is and why you do it?

CH: The Golden Crown Literary Society (GCLS) is the premier, non-profit membership organization focused on supporting and recognizing lesbian-themed literature.  I applied for this position to help GCLS broaden and diversify its membership, and to increase the inclusion of younger, and more diverse attendees at the organization’s annual conference.  I’m doing that by assisting GCLS in identifying new partnerships and advising on internal processes and practices.

SB: How has your background in public broadcasting helped you as a fiction writer?

CH: I had amazing opportunities in public media to travel.  My writing themes are a culmination of my experiences growing up in Detroit, and the insights I’ve gained through the national and international travel I’ve done.  I’ve been in the room, and often at the table, with national politicians, heads of state, celebrities, academics, community organizers, educators, artists, and engaged citizens who have shifted my paradigms, and expanded my interests.  I’ve been on both sides of the microphone/camera in public (and commercial) media but the best part of that has been to sweeten my powers of observation, and increase my intention to be an active listener.

CH: The second book in the Charlie Mack Motown Mystery series, Wake Me When It’s Over has just been released and is in launch phase now. I’ll be doing a small book tour this summer. Book 3 in the series is completed, and under contract with my publisher, Bywater Books. It is about an investigation of a series of heinous crimes against homeless people in a neighborhood of Detroit. I’m currently writing the fourth book in the series; it’s set against the backdrop of a grand jury trial.  I’m organizing a dozen short stories –not mysteries — to be published in a collection. I’ve been included in a couple of recent anthologies, and I’ve begun to explore the possibility of re-issuing Long Way Home: A World War II Novel with a publishing house that can give the book more air. I wrote that book five years ago, and I’m still getting requests to read from, and talk about the book. The Amazon reviews also continue to trickle in. It’s amazing to me how much WWII books resonate with the reading public.

3 thoughts on “SCOTT BUTKI’S INTEVIEW WITH CHERYL A. HEAD”