With Bad Axe County, John Galligan completely blew me away with a character and plot that kept me on the edge of my seat. 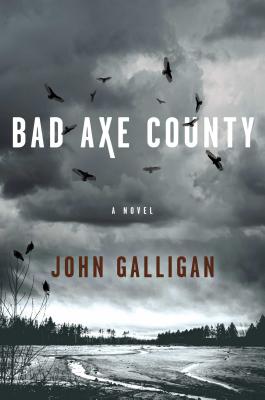 I was particularly taken with a protagonist who as a teenager in the midwest was named Dairy Queen, but in the present is a bad-ass interim sheriff of rural Bad Axe County, put in that role after the death of her corrupt predecessor.

In addition to fighting crime, dealing with misogyny and corruption she is also trying to solve the mystery of her parents dying more than ten years prior and being skeptical of the police writing it off as a murder-suicide. In the middle of a storm she is also trying to track down and stop human trafficking.

Galligan let me interview him via email.

Scott Butki: How did you come up with this story? Which came first, the characters or the plot?

John Galligan: First came Sheriff Heidi Kick. I was taken by the idea of a girl who grows up in a rural Wisconsin community and is a star in one venue—she is the Crawford County Dairy Queen, and later the Dairy Queen for the whole state of Wisconsin—and later plays a completely different role in that same place. When you talk about a smart, beautiful, fully rounded Wisconsin farm girl, you are talking about a very formidable person, someone who can milk a cow, do calculus, ride rodeo and play softball, drive any kind of machine, shoot a gun, play at least one musical instrument, and look naturally pretty, all without being much aware of how special she is. So I wanted to put a young woman like that in a position of power and see what happened. Then I did research into crime in the rural Midwest and the plot came from that (see question 3).

Scott: You had me pulled in from the start, with the protagonist of Heidi White, daughter of murdered parents who has to deal with sexism and her Dairy Queen past. How did you develop this great character?

John: It was easy to fall in love with a character like Heidi Kick, and because I spend so much time in rural Wisconsin I see young women who could be Heidi all the time. In my novel The Nail Knot, everybody’s favorite minor character, and mine too, is a young farm woman named Junior who is taking care of her dad, who has dementia, while she tries to keep the farm afloat. So Junior is the prototype for Heidi Kick—me taking a favorite minor character from another book and building her into a heroine. I did research into the whole queen phenomenon in the rural Midwest (maybe elsewhere too), where, swear to God, there is a queen (and princesses) for everything. Something perhaps about the need to acknowledge (and perhaps confine) femininity in rural cultures. I also did research into the way women with power are often treated in the workplace. Some of this shocked me. I expected sexism . . . but not the truly ugly open hatred that many women have to face. All of the violent and hateful tweets directed at Sheriff Kick come directly from that research. They are real things that men have directed at women above them in their workplace. My experience as a baseball player also informs this. I have spent a lot of time in the “trenches” of misogyny . . . and you don’t want to know . . . except you will know if you read Bad Axe County. Finally, I think I am able to feel very close to Heidi’s heart as a parent, and I was able to tap into my feelings and experiences as a dad to understand how she might feel and behave as a sheriff who is also, and foremost, a mother.

Scott: Human trafficking is one of those dark, awful topics that people often don’t talk about, let alone write about it. Why did you decide to tackle it?

John: As I said in my answer to Question 1, first I had a female sheriff—in fact, the first and only female sheriff in Wisconsin. Then I researched crime in the rural Midwest. I came across a study where the researchers were interested in sex trafficking. They interviewed rural law enforcement leaders across the Midwest—almost all men—about their perceptions of this problem in their communities. Overwhelmingly, they reported that there was little or no problem, that sex trafficking for the most part did not exist. The researchers then interviewed people who worked in women’s shelters and crisis centers, and women’s health services—almost all of them women—and heard from them that sex trafficking not only occurred but in their view was epidemic.

So what happens if suddenly law enforcement is being led by a woman? What if suddenly we have Sheriff Heidi Kick in an environment where sex trafficking has previously been tolerated or ignored? What becomes visible? What happens when a woman sheriff tries to enforce change?

The research I did on sex trafficking and the closely related business of pornography was harrowing and often hard to continue. Same for some of the writing. But I couldn’t turn back once I understood how real this was, and what a perfect challenge it was for the first woman sheriff in the Bad Axe.

Scott: Do you know of a place like Bad Axe County or was it a total invention?

John: Bad Axe County is a fictional county in a real place, the coulees of southwestern Wisconsin, a rugged, generally impoverished, sparsely populated, and gorgeous region along the Mississippi River. It’s my favorite place to be. Bad Axe is a place name in the region. I have inserted Bad Axe County between two real counties, Vernon and Crawford.

Scott: Is this novel a stand alone or part of a series?

John: It is part of series. I am currently at work on the next one, starring Heidi Kick and tentatively titled Dead Man Polka.

Scott: How has your background, ranging from journalist to cab driver to film screenwriter to living in Japan, among other things, affected your work as a novelist?

John: It all works together somehow. As a journalist I learned to sit my butt down and write to meet deadlines. Nothing like it for vanquishing the whole notion of writer’s block. Screenwriting was how I learned to write visually and tell a story. I’ve always been adventurous, and experiences like working in the salmon industry in Alaska, hitchhiking across the country, driving a cab, teaching poetry in a prison, immersing myself in rural Japan, etc., obviously broaden my view of humanity and give me ideas and characters to write about. The experience in Japan, particularly, stripped me down to zero, made me aware of what it meant to be a white American male, and I was privileged by that opportunity and rebuilt myself as a different, more aware person. I am very proud of the novel I wrote based on that experience, my first, Red Sky, Red Dragonfly, which the reviewer for the major English newspaper in Japan called “one of the most authentic evocations of this country and its people I have read.” It took me seven years to complete, and in that time I became a novelist.

Scott: How has teaching affected your writing?

John: A massive and continuous encounter with human souls . . . all the more because as a writing teacher my job is to help students find their voices and express their truths clearly to the world. Writing, both the process and the product, is one of the most deeply and fully integrating human experiences, in my view.

Scott: Let’s end with what I call the bonus question: Here’s a chance to ask a question you wish interviewers would ask and then answer it.

John: What about your other books? See question 6 for my first novel. After that I wrote a serious of murder mysteries, The Nail Knot, The Blood Knot, The Clinch Knot, and The Wind Knot, which feature a nomadic fly fisherman crisscrossing the country trying to fish himself to death but instead finding life in the people he meets and reason to keep living in the murder cases he solves. And no, while fly fishing is the milieu and the metaphor, they are not about fishing or for fishermen. Many non-fisher-persons enjoy them and the most common thing I hear is, “Wow. What a story! And your books really make me want to learn to fly fish.”  I hope readers will give my other novels a try too.