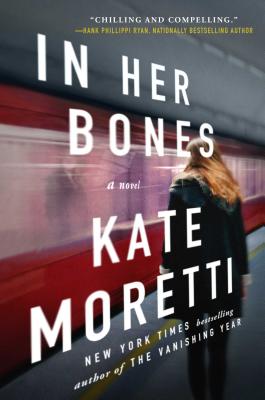 I’ve been really excited about the resurgence of the psychological thriller—while I read all over the crime fiction genre, I especially enjoy reading about authentic women trapped in desperate situations (of their own making or not)—but they can occasionally be formulaic. The reader brings certain expectations, and for me those were blown out of the water with Kate Moretti’s latest, In Her Bones.

The story revolves around 30-year old Edie Beckett—a state employee with just a tenuous hold on sobriety and an unhealthy relationship with her brother.  The latter is the only one who knows that their shared history includes a mother who lives on death row, the convicted killer of 6 women. As Edie tries to exist outside the spotlight of her mother’s infamy, she fights a growing obsession—an unhealthy fascination with the families of her mother’s victims. One night she crosses a line and a man ends up dead—and suddenly Edie has become the prime suspect for his murder, with the detective who arrested her mother (and who has taken a keen interest in Edie) hot on her trail. She decides to go underground to find the real killer and clear her name but as she runs into dead ends, she starts to question whether perhaps she has more in common with her mother than she thought, and wonders if she too might be capable of murder.

I’ve always been fascinated by the idea that you could change your hair color, throw on glasses and different clothes and go underground. I’m also fascinated by the amount of information you can dig up on the internet –it’s truly disturbing how little privacy we have. Moretti takes these concepts and weaves a twisted tale of a young woman trying desperately to escape a childhood of trauma. This was one of those page-turners that kept me up way past my bedtime (but only for the one night it took to finish!)

Kate Moretti is the New York Times bestselling author of 6 previous novels, most recently the critically acclaimed The Blackbird Season. Her style has been compared to that of Ruth Ware and Megan Miranda, so anyone who likes the darker side of the domestic thriller won’t want to miss this one.