James A McLaughlin’s Bearskin is a debut novel that announces the a new talent with a lot of promise. The protagonist is Rice Moore, a man hiding from a Mexican drug cartel in Applachia as the caretaker of a wilderness preserve. When he discovers the carcasses of mutilated bears on his land, he goes up against a black market ring as well as his old enemies. It is a crime thriller rich in character and sens of place packing one powerful voice. Mr. McLaughlin was kind enough to talk about Bearskin and where it takes place. 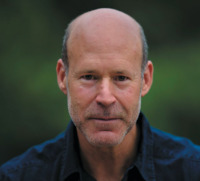 MysteryPeople Scott: Rice Moore is a complex character that is full of contradictions, yet I saw a certain moral through line to him. How did he come about?

James A. McLaughlin: When I decided to completely rewrite the first version of Bearskin after a long hiatus, I stripped out all of the main characters but kept the setting and the fundamental premise. For the opening scene I had a cabin on a mountain, a big meadow, vultures flying around, and a formless, faceless male protagonist. I even had this specific image of a vulture flying low overhead: what the guy sees is its shadow, a big dark form coming at him too fast. This happens to me every now and then, and it can be startling. I thought, what if he overreacts to the buzzard-shadow, has a moment of serious fight-or-flight before he realizes what it is? Say he has a reason to expect an attack; something, someone is hunting him. He has suffered some trauma, has done something terrible, and now he’s jumpy as hell because he’s hiding from the consequences. But he kind of likes the vulture spooking him, he sees the humor in it. He’s wry, tough, generous. Rice Moore just took off from there.

MPS: I found the crime you mainly deal with, bear poaching, horrifying because I hadn’t heard about it. What made you choose it as the crime to propel your narrative?

JM: Actually it was the crime itself that sparked the narrative in the first place. In the summer of 1994, I was about to start at a creative writing program, and my cousin told me this story about poachers leaving mutilated bear carcasses in the woods near where we grew up. I did some research and found out about the black market, the use of bear parts in traditional medicine and cuisine, the money that poachers could make back then. I wondered what might happen if you caught bear poachers on your property. For my first workshop piece in the writing program, I turned in the beginning of a story—eventually a novel—built on the basic idea that hasn’t changed since: protagonist finds bear carcasses, tangles with poachers.

MPS: The book is set in Appalachia. Besides familiarity, what makes it a good setting for you to use as a writer?

JM: I set Bearskin in a fictional county in eastern Appalachia, on the very edge of the region, a place where you can find demographic and ecological mixtures, striking contrasts—there’s a lot of inherent conflict there and that makes for a rich setting. Wild forests shading into open agricultural land and woodlots, bears coming off the mountain to raid exurbanists’ bird feeders, rich and impoverished people in close daily contact. In a Wal-Mart you could easily see a poor but proud mountain family in line behind a lean-limbed horse person whose wardrobe sold on eBay would feed the mountain family for months. These folks come from different dimensions, and you’d find very different stuff in their shopping carts, but there they are sharing the same physical space, usually acting friendly, but the gulf of privilege is breathtaking. In my book, the sociological edge effects show up in different ways. For example, the nature preserve where Rice works is owned by a rich family’s charitable foundation, and there are a lot of blue collar neighbors who resent the exclusion, the very idea of preservation, of removing natural resources from the local economy. Rice Moore is from the outside, from Arizona, and he’s caught in the middle. He has a job to do as caretaker, and he has developed real affection for this amazing forested mountain property under his care, but he also has sympathy for the locals’ perspective. Naturally, he gets in trouble.

MPS: What do think the biggest misconception of the place is?

JM: Probably that it’s homogeneous, and that all the people there are like the characters in Deliverance…or, to use a more contemporary stereotype, that the entire region is deeply depressed and everyone’s laid off from the coal mines and hooked on meth and oxy and black tar heroin. There certainly is a lot of that, and in the more depressed parts of the region I gather those things are indeed tragically prevalent. But Appalachia encompasses a large geographic area, including some mid-sized cities, and twenty-some million people live there.

MPS: As a debut author, did you pull from any authors who inspired you?

JM: Debut author indeed, but I’ve been writing for decades, and a complete list of inspiring authors would be impossibly long! Among contemporary writers, I’m probably most inspired by Cormac McCarthy, though as I’ve said elsewhere, you really can’t try to write like he does. Also Jim Harrison, Thomas McGuane, Rick Bass, Edward Abbey. More recently, Tana French and Kem Nunn. I probably pull from nonfiction just as much, from writers who help me deep-dive into the aspects of life most important to me: Paul Shepard, Barry Lopez, Charles Bowden, David Quammen…there are so many.

MPS: Is there another novel you have lined up in the future?

JM: I’m working on two right now, both related to Bearskin. The first, set in the Southwest, focuses on a brother and sister, estranged for years and brought together by a dangerous inheritance. Rice Moore and his girlfriend Apryl Whitson—this is a couple of years before the events of Bearskin—appear in the final third of the book. The second novel I’m working on is a sequel to Bearskin, and I’m still in the fun stage of sketching out possibilities for that one.

One thought on “INTERVIEW WITH JAMES A MCLAUGHLIN”