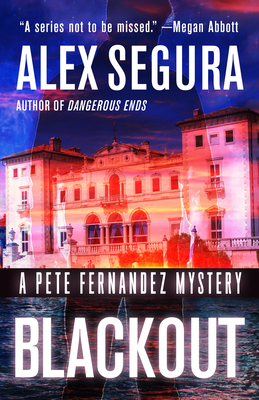 Alex Segura has slowly made a name for himself with his Pete Fernandez series. The sports writer turned private detective, who battles his inner demons and the bottle as much as the bad guys, is steadily grabbing fans. I’ve been reading to the series for the past couple of years and his visit to BookPeople on May 16th gave me the opportunity to read his latest, Blackout. He now has a new fan.
Blackout finds Pete with an office in New York, staying away from him Miami home and the past. A client comes in, drops it on his desk anyhow. A businessman running for Florida senate wants him to find his missing ne’er do well son. Pete refuses until he sees a photo of the missing person. He resembles a young man who was seen with Pete’s high school crush before she was murdered. Pete heads back down to Florida and with the help of his former partner Kathy Bently get involved in a mystery dealing with a cult, the mob, and old wounds.
What impressed me about Blackout was how as a first time reader of the series, I understood Joe and his world so thoroughly. I knew him as well as Lew Archer, Sheriff Walt Longmire, Moe Prager, or any of the other fictional slueth I’ve read more than a dozen books of. Segura gives us enough history from the previous books and gives us Pete’s connection and emotional point of view to them, showing how they connect to is current actions. He also defines him through his interactions with other series characters, who come off both believable and caring.
Segura balances action and emotion in Blackout like a master craftsman. He carries the reader along with an engaging plot and likable if damaged hero. You root for Pete both to save the day and save himself. I’m looking forward to reading his next case as well as the one before.

2 thoughts on “Review Of Blackout by Alex Segura”