Tom Seigel has come up with a great concept for his first novel, The Astronaut’s Son. It’s an engaging, fascinating work. 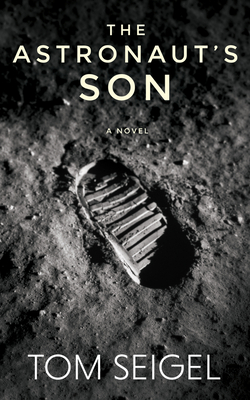 Jonathan Stein is, as the title suggests, the son of an astronaut, an Israeli man who died in 1974 before he was able to fly into space, the apparent victim of heart problems. Now Jonathan is ready to go into space himself with NASA, its first trip to the moon in 30 years, except he’s hearing rumors and stories suggesting his dad was killed to protect NASA secrets, possibly relating to former Nazis who worked for NASA.

And Jonathan thinks the reclusive Neil Armstrong, who Jonathan has been writing to his whole life without ever hearing a response, may know the answers to his many questions. Some of the questions Jonathan is encountering is coming from people who believe the moon landing was fake.

This is an especially impressive debut novel for someone who got an MFA in fiction writing after 20 years as a litigator. Tom served as both deputy chief and chief of the justice department’s Brooklyn Organized Crime Strike Force, prosecuting members and associates of La Cosa Nostra.

He agreed to let me interview him via email.

Tom Seigel: The Astronaut’s Son was born in tragedy. It was 2003, and Ilan Ramon, the first Israeli astronaut, had died in the Space Shuttle Columbia disaster. I was struck, as I’m sure many were, by the fact that both Ramon and Judith Resnik, the first Jewish American in space, suffered the same terrible fate in two separate shuttle accidents. It felt like more than just a sad coincidence or very bad luck. It felt like an atavistic curse: “Let there be no escape.”

Then the notion that “flight” contained elements of both adventure and escape took hold, and I asked myself a question: “If the exodus story can serve as a metaphor for liberation of the oppressed, could the unique, peripatetic story of the Jews serve as a metaphor for the future of humanity in space?” Are we exploring the cosmos as mere intellectual pastime or because we know that another exodus will be needed? As I began to research, I learned about the secret government program (Operation Paperclip) that brought Nazi engineers to the United States after the war to work on rocketry. Many ended up at NASA. The idea of juxtaposing Germans and Jews at NASA captured my imagination, and after more years than I care to admit, my novel is finally ready for launch.

Scott: Which came first, the plot or the characters?

Tom: At least the protagonist came first. I wanted a Jewish entrepreneur (Jonathan Stein) to attempt a return to the moon, and I wanted him to wrestle with the ghosts of his past—his late father, a fictitious Israeli astronaut in the Apollo program, and the ex-Nazis his dad would have encountered. Questions about his father’s untimely death allow us to look back at that time through Jonathan’s eyes. I was not sure when I started writing what he would find, or whether he would make it to the moon. I also wanted Neil Armstrong to be a looming presence in Jonathan’s mind—a reluctant hero, a long-distance father figure and a one-way pen pal. Armstrong’s reclusive behavior and relative inaccessibility created space (no pun intended) for mystery and intrigue. The other characters also took shape before I had the plot finally worked out.

Scott: I realize this is fiction but I have to ask a question I am sure some readers will ask, namely, “Does NASA indeed have a checkered past, any employees who were former Nazis?”

Tom: The short answer is yes. In the 1960s and 1970s, Wernher von Braun was Director of the Marshall Space Flight Center, and Kurt Debus was Director of the Kennedy Space Center. Both men were not only Nazi party members but SS officers. And there were others. A few fairly recent nonfiction books detail this shady history of Operation Paperclip. Among them, I would recommend Michael Neufeld’s Von Braun: Dreamer of Space, Engineer of War and Annie Jacobsen’s Operation Paperclip. For years, the government whitewashed the history of its German rocket contingent. Their influence was so great that even today, the U.S. Space and Rocket Center (the official visitor center for Marshall), has a biergarten on Thursdays in the summer referred to as “Stein and Dine.” I have been amazed that more people are not troubled by the honors given to some of these (opportunistic to say the least) men.

Scott: What kind of research did you do and how did that go?

Tom: I read books about Operation Paperclip in general and the more prominent German scientists and engineers who were part of it. I also read about NASA’s history and astronaut training. Stephen Hawking’s A Brief History of Time  helped me get a grasp of basic concepts in cosmology. The more entertaining research included surfing the Internet for outlandish lunar landing conspiracy theories. And of course, I watched Capricorn One. (Yes, I believe we landed on the moon, and so does Jonathan.)

Scott: I was glad you referenced Richard Feynman, someone I find fascinating. What do you think of him?

Tom: Richard Feynman is an American original, a Nobel laureate in physics with a thick outer borough accent who liked to play the bongos at strip clubs. He had a unique ability to explain physics to the uninitiated, much as Leonard Bernstein explained classical music to children. Feynman was charming, irascible and possessed of an insatiable curiosity. He, along with Neil Armstrong, served on the Rogers Commission, which investigated the Challenger disaster. I actually had something in an earlier draft that was meant as an inside joke about Feynman’s fascination with breaking dry spaghetti, but alas, it was left on the cutting room floor.

Scott: Why did you decide to get an MFA in fiction writing and write this novel?

Tom: I had the proverbial eighty pages in a drawer for years. I pulled them out sporadically and tinkered without much progress. I think the MFA program, in addition to improving my writing, served as source of concrete deadlines. I was also in my forties and ready for a career change.

Scott: How has your past work, including as a litigator, helped you as you made that switch?

Tom: I think being a former prosecutor has been very helpful to me as a writer. Prosecutors are storytellers. They have a cast of characters (witnesses) and have to construct a compelling and credible narrative for a jury. A prosecutor is also always on the lookout for the perilous plot hole. If you have one in your case, you can be sure that a defense lawyer is going to stick a finger in it and make sure the jury sees just how big the reasonable doubt really is. Having an imagining adversary (editor) on my shoulder while writing comes as second nature. Continuity, foundation and authenticity are important elements of any successful prosecution, and they’re pretty good for novels too. A challenge, on the other hand, is the artful use of nuance—great for fiction writing, deadly for a closing argument.

Scott: What do you hope readers will take away from this book?

Tom: Of course, I want them to be entertained, and while the book has its serious side, I would be delighted if they were to laugh out loud at least once or twice. The Astronaut’s Son is not a traditional whodunit. I won’t spoil the ending, but I hope they come away with meaty questions to chew on—about history, progress, ethics and the future. Small subjects like that.

Tom: As a former mafia prosecutor, more than a few people have suggested I write a book about mobsters. I’m in the middle of writing a second novel that is not about the mob, but it might have a few unconventional wise guys. I think the traditional mob genre, like the mob itself, is mostly played out, but there’s still room for a colorful goodfella or two.

One thought on “SCOTT BUTKI’S INTERVIEW WITH TOM SEIGEL”