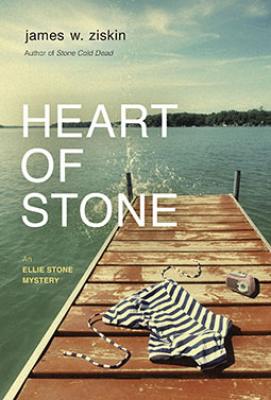 In James W. Ziskin’s latest Ellie Stone mystery, Heart of Stone, our heroine is enjoying a lazy August holiday in an Adirondack cabin belonging to her aunt. One morning, two men are found dead just a few feet away from a tranquil lake—they appear to have fallen from a treacherous cliff. The police treat the deaths as an unfortunate accident, but for Ellie things don’t quite add up—the two men apparently didn’t know one another, and a station wagon belonging to neither was found a few feet from where the men must have fallen. So why did they die together?

In true Ellie fashion, she sticks her nose where it isn’t wanted—encountering a colorful cast of characters with loose morals, zealous political views, and secret romances. She’s tough, smart, and sassy—and can hold her Scotch with the best of them—but her heart may be at risk when she becomes involved with a fellow vacationer. And as she delves deeper into the mysterious deaths, more than her heart may be in peril. The plot has plenty of convolutions with a supremely satisfying ending.

Ellie is one of my favorite characters in the genre. Her intelligence and fearlessness belie her youth. She’s at once vulnerable yet self-assured, intelligent yet impulsive, liberated yet yearning for a romantic connection. But what really sets Ziskin’s books apart is the poetry of his writing—a linguist by training, he excels at poetic and evocative descriptions of the fascinating characters and the nostalgic 1960’s upstate New York setting. Previous installments in the Ellie Stone series are: Styx & Stone; No Stone Unturned (an Anthony Award nominee for Best Paperback Original); and Stone Cold Dead (a 2016 Left Coast Crime “Lefty” Award nominee for Best World Mystery Novel).

Heart of Stone comes out today! You can find copies on our shelves and via bookpeople.com.