Mystery & Thriller aficionado Scott M. stops by to deliver his review of John J. Jacobson’s forthcoming All the Cowboys Ain’t Gone ahead of our virtual event with the author next week! He’ll be in (virtually) on March 4th at 7PM CST with local author James Wade to discuss his latest release, and registration is completely free.

John J. Jacobson’s All The Cowboys Ain’t Gone is a throwback to another time in two ways. It takes place at the end of the nineteenth century in Texas, and Africa in the beginning of the twentieth, with it’s lead dealing with changing times. It also taps into the high adventure of the popular fiction of those eras. The result is one of the most fun pieces of nostalgic escapism since Raiders of The Lost Ark.

The book’s young hero, Lincoln Smith, goes on one hell of a journey. Raised on stories of the Wild West—thanks to his Texas Ranger father—he dreams of prairie adventure. He gets what he wishes for at age ten when an outlaw kidnaps his mother and him to draw out his father for vengeance. The experience makes him wise to harsh realities and strengthens his adherence to the cowboy code.
In his early twenties, life hits him hard. The new century pushes frontier life aside with its big business and machines. He gets  kicked out of college for accidentally  blowing up part of the campus. He takes a job with a third-tier Wild West show that goes bust. Then the final kicker, his love dumps him. For Lincoln, there is only one option left, join The French Foreign Legion. 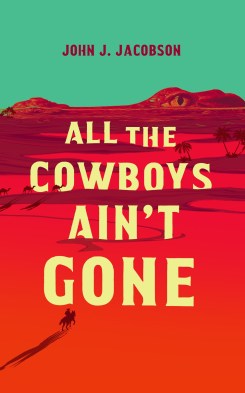 His trip through Africa to the recruitment station is full of danger and excitement in itself. He is robbed, befriended by some American legionnaires, and he gets a sidekick in Omar, an Egyptian who has read too many dime novels and mangles western idioms. It’s practically an achievement when he signs up.
After he joins up, the adventure heightens in its sweep. Assigned to protect an ambassador, he falls in love with a princess, fights off dozens of scimitar-wielding dervishes, and ends up in a climactic battle. It is all tied to the plan of a nefarious priest of a crocodile cult. Yes, there are also crocodiles.
Jacobson has just the right touch for this story. He grounds the characters and setting in just enough reality to let the adventure sing. He also uses humor. injecting a sly, yet loving, self awareness. Lincoln realized much of western legend is myth, yet it’s the code that is worth something to believe  in. It is that code that weaves through the sweep and romance of the adventure.
All The Cowboys Ain’t Gone is much about storytelling and its importance as much as the story it tells. Like Michael Chabon or some of Joe Lansdale’s work, John Jacobson uses classic tropes to explore characters and beliefs. Times may have changed, but heroes are always needed. Lincoln Smith is a choice.

You can pre-order your copy of All the Cowboys Ain’t Gone from BookPeople in-store and online now. And be sure to tune in to our virtual event with Jacobson and local author James Wade on March 4th at 7PM CST—registration is completely free!

About the author: Though John J. Jacobson didn’t join the French Foreign Legion after being jilted by a girlfriend, or over his displeasure of missing the last great cattle drive, he has, borrowing Churchill’s phrase, lived a rather variegated life. He was born in Nevada, grew up in the West, surfed big waves in Hawaii, circled the world thrice, survived the sixties and seventies, corporate America, and grad school. Among other degrees he has an MA in Renaissance literature from Claremont Graduate University.