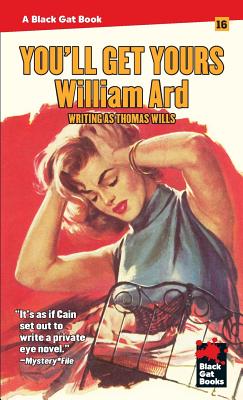 Lionel White is one of those classic hard-boiled authors more people should know about. He was the master of the caper. Well-planned heists, robberies, and kidnappings and the place of fate (or more often human emotion) that unravels the best-laid plans were his specialty. His novel Clean Break is a prime example.

Clean Break concerns the planning, execution, and aftermath of a race track robbery of close to two million dollars. Almost every perpetrator is a “normal citizen” acting as an inside man. Aside from the fresh-from-prison master mind, Johnny Clay, they only know their particular part of the job. One of the men’s wives is seeing a hood on the side, and the two of them hatch a plan to rob the robbers.

The heist is the major character. The planning and execution is shown down to the detail. White uses an innovative technique in rewinding time to follow each participant in their part of the job. Critics often give credit for clarity to Stanley Kubrick in his film adaptation, The Killing, yet White’s clean and lean style allows him to tell a complex tale without the reader without ever being lost. The execution is so sharp, the inevitable unraveling hits you in the gut.

That’s not to say the characters aren’t indelible – Johnny Clay is a stick-up man with ambition. This is his first big-time score, a factor that creates suspense by keeping us in the shadows as to if he can pull it off. Other than his attachment to contacts in the underworld and his honor-among-thieves morality, he makes Stark’s Parker look like Mr. Personality and probably sizes everyone he meets as a partner or a victim. Even the “normal citizens,” including a cop with mafia connections and a degenerate gambler-turned-track-bartender, are morally compromised. Clay says they all have a little larceny in them. Not only did White not bother to make his criminals sympathetic, he offered very little to understand them. He knows you don’t read heist novels for heroes.

i was happy to discover that publisher Stark House has recently brought Clean Break back into print. Clean Break is available in an omnibus edition with White’s novel The Snatcher that also includes a great introduction by crime fiction writer and historian Rick Ollerman. The Snatcher is a kidnapping story with such a detailed crime, a French desperado was able to use the plot to execute a successful kidnapping of his own. Both show White’s expertise in criminal operations. It makes you wonder if Lionel White did something on the side to supplement his writing income.

You can find copies of Clean Break/The Snatcher on our shelves and via bookpeople.com.