For March, our Murder In The Afternoon book club will celebrate the month that marks the hundredth year of hard boiled writer Mickey Spillane’s birth. With the creation of tough guy detective Mike Hammer, Spillane launched the paperback boom that gave us a new generation of great genre writers. We will be discussing his fourth Hammer book, One Lonely Night. 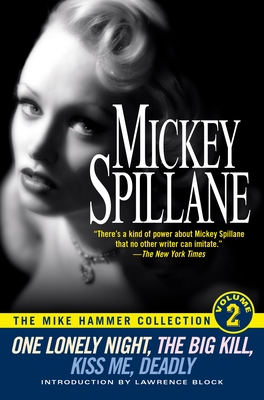 The story begins with Mike walking along the bridge on a rainy night after a judge has read him the riot act about his tactics. A woman runs toward him chased by a gunman. He shoots the man down, but frightens the woman so much, she jumps off the bridge. Out of a mix of guilt and blood lust, he tracks down those responsible in a back alley trail of thus, politicians, and (this being the fifties) communists.

There will be a lot to talk about with One Lonely Night – how Spillane reacted to his critics, Hammer’s relationship with violence, and genre fiction in the age of The Red Scare. We will also be showing a documentary — Mike Hammer’s Mickey Spillane, directed by friend and fellow writer Max Allan Collins featuring authors like Lawrence Block, Sara Paretsky, and Walter Mosley. We will be meeting in BookPeople’s Third Floor at 1PM, Monday the 19th. Mickey Spillane’s Mike Hammer Volume 2 that contains One Lonely Night is 10% off to those who plan to attend.

For more Spillane, the Hard Word Book Club will be discussing The Girl Hunters on the night of March  28th at 7PM, along with viewing the film version starring Spillane as Mike Hammer.

New Orleans is a city known for sin, drinking, and corruption; a perfect place for the 2016 Bouchercon where hundreds of crime novelists, publishers, and fans meet. I’ve been going solo to these things, but this time I was joined by my fellow MysteryPeople, newly named Director Of Suspense Molly Odintz and and MysteryPeople Blogger Meike Alana to divide and and conquer. That said, I was still exhausted after I was done.

Even the panels were more rollicking than usual. When Moderator Laura Lippman spoke on behalf of Megan Abbott on their “Real Housewives” discussion, panelist Greg Herren called up Megan to see if Laura was right. for the record, she was. On a panel on vigilante justice in crime fiction Stuart Neville questioned the authors who talked about the need for a vigilante hero, by saying it is a fascist trope. A panel on the use of violence got interesting when Taylor Stevens, author of The Informationist, talked about the need for it in her writings. “Our characters are gladiators in the arena and our readers want to see them get bloodied.”

END_OF_DOCUMENT_TOKEN_TO_BE_REPLACED

The Hard Book Club meets to discuss The Legend of Caleb York by Mickey Spillane and Max Allan Collins on Wednesday, September 28th, at 7 PM on BookPeople’s 3rd floor.

Hard Word Book Club to discuss: The Legend of Caleb York by Max Allan Collins, based on the screenplay of the same name, by Mickey Spillane

Our Hard Word Book Club always makes a point to discuss a western once or twice a year. This time, we are reading one from an author mainly known for writing about danger in the big city. In the mid fifties, Mickey Spillane was at the height of his his career, due to his tough guy private eye Mike Hammer. During this period, he was asked by none other than John Wayne to write a western screenplay. Unearthed after his death, it was adapted into the book The Legend Of Caleb York by Spillane’s friend and collaborator Max Allan Collins.

The story is a play on the classic stranger comes to town idea. A crooked sheriff works to push a crusty rancher and his pretty daughter off of their land. The rancher sends word for a gunman who made a name for himself by killing the famed gunslinger Caleb York. Not long after, a man rides into town, dressed as a dude. He quickly dispatches some of the local ruffians. When he signs the hotel ledger, he gives the name of Caleb York. The mystery of this man slowly reveals itself as both factions make their play.

The Legend Of Caleb York is a fun read that should inspire a great discussion about genre, Spillane, and script versus book. We will also be watching the hour long documentary Mike Hammer’s Mickey Spillane, directed by Max Allan Collins and featuring many crime fiction greats talking about the hard boiled author. We will be meeting on BookPeople’s third floor, Wednesday, September 28th, at 7PM. The book is 10% off to those who attend.

When it comes to tough guy action, there is no bigger name right now than Lee Child. His Jack Reacher has now saved the day and dealt out retribution in nineteen books. If you’ve finished his latest, Personal, and still need to root for a true, if tarnished, hero, we suggest these reads.

The Ranger by Ace Atkins

An Afghan war vet, Quinn Colson, returns to his Mississippi home to find it has been taken over by the local kingpin. With the help of his friends, his wits, and more than a few bullets, he fights to take it back. Inspired by the Southern-set action films of the Seventies, this book is rich in character, deep Southern flavor, and action.

More Harm Than Good by Andrew Grant
A simple hunt for the person who stole his boots, puts British Naval Intelligence officer David Trevellyan in a dark international conspiracy, where only he can save the day. Fun and well paced with a hero who pulls you in on your terms.

The Mike Hammer Collection: Volumes 1,2, and 3 by Mickey Spillane

A lot of Jack Reacher’s DNA can be traced to Spillane’s hardcase veteran of the Second World War who operates as avenger as much as private eye. These books popularized the idea of a hero who took out the bad guys with there own methods. Tough, brooding, with a hard-as-nails voice, these books are red meat in book form.

Just uncovered this video of author Mickey Spillane on a talk show with a few other crime fiction authors. He talks one word endings, plot structure, and beautiful women.

Our History of Mystery class will discuss Mikey Spillane’s life and career this Sunday at 6p, with a focus on his book One Lonely Night. Afterwards we’ll screen a documentary about Spillane. The class meets on our third floor and is totally free. Just head on upstairs.