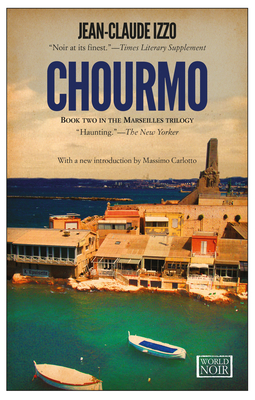 Our June Murder In The Afternoon book club will be celebrating International Crime Fiction Month with a discussion by one of France’s most celebrated crime writers. Chourmo is the second installment of Jean Claude Izzo’s Marseilles trilogy. Once again, the romantically tarnished knight Fabio Mantale navigates this port city of many cultures on a quest for private justice and other things unattainable.
Mantale has left the force, mainly due to the events from the first book in the trilogy, Total Chaos, but the cousin he used to be in love with puts him back on the streets. Her son who was having a Romeo & Juliet style affair with an Arab girl has gone missing. The search involves organized crime, religious extremism, the city’s politics, and early on the murder of his informant, Serge, creating a second mystery.
Chourmo deals with several different themes, both old and new love, intolerance, the culture of Marseilles. We will try to cover as much as we can. Join us with your thoughts Monday the 18th, 1PM, on BookPeople’s third floor. Chourmo is 10% off for those planning to attend.
Next month, July 16, we will be discussing Craig Johnson’s Dark Horse with the author calling in.