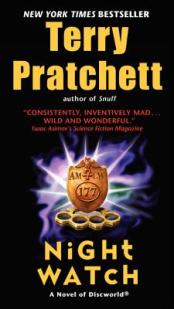 On Monday, July 6, at 7 PM on BookPeople’s third floor, the 7% Solution Book Club will discuss Terry Pratchett’s Night Watch, one of his many Discworld novels to detail the adventures of Sam Vimes and the watchmen of Ankh-Morpork. Our pick for August is Heat Wave by Richard Castle.

A few months ago, we lost a hugely important voice in fantasy writing; one of the funniest, most ethical, and least judgmental voices to ever appear on the written page. Terry Pratchett, who gently fought the good fight by parodying the hypocritical hypotheticals of the bigoted and the intolerant, passed away March 12 of this year, and left millions of fans bereft, yet determined to honor his work.

Night Watch was the first of Pratchett’s novels I read, and (the day after finishing it the first time) the first I re-read. It functions as a good introduction or supplement to the Vimes series. Night Watch involves a time-travel plot where many of the regular characters are either absent or present in their younger selves, so for those who haven’t read a Pratchett novel before, Night Watch functions as a stand-alone, while those already familiar with Pratchett’s characters will be able to appreciate the subtle variations when meeting these characters in an earlier time period.

Night Watch begins during an electrical storm, when Sam Vimes, head of Ankh-Morpork’s Night Watch, climbs to the top of a tall, magical building in pursuit of a killer and is promptly transported back in time to 30 years before, just in time for a revolt against Ankh-Morpork’s crazed despot of the time. Vimes must go undercover and guide his younger self and the citizens of Ankh-Morpork to the revolt’s proper conclusion in order to ensure that the future remains intact. Night Watch draws historical inspiration from the Battle of Cable Street, a 1936 confrontation between fascist demonstrators and a diverse coalition of anti-fascist counter-demonstrators that led to a ban on uniforms and the British Nazi Party’s corresponding loss of popularity.

Although I’ve read and re-read much of Pratchett’s work an embarrassing number of times, his Sam Vimes novels have always appealed to me the most. They merge two of my favorite genres – fantasy and noir. Vimes, as a character, is somewhere between a cartoon superhero and a classic hard-boiled detective. As head of the Night Watch (Ankh-Morpork’s police force) he upholds the law and crusades against corruption and injustice, while simultaneously dealing with his own alcoholism, prejudices, and bizarre coworkers.

He presides over the Night Watch as the force continues to diversity and expand, and each Vimes novel brings with it a first on the force, including the first female detective, the first troll and dwarf detectives, the first vampire detective, the first female dwarf detective, and so on. Ankh-Morpork, a historical mash-up of 19th century London and 15th century Venice, experiences a remarkable adoption of modern ideas and attitudes throughout the series, and Night Watch, as the only Vimes novel to involve time travel, frames this progress well by setting it against a nightmarish recent past.

You can find copies of Night Watch on our shelves and via bookpeople.com. Book Clubs are free and open to the public, and book club picks are 10% off at the register in the month of their selection. The 7% Solution Book Club meets the first Monday of each month on BookPeople’s 3rd floor.