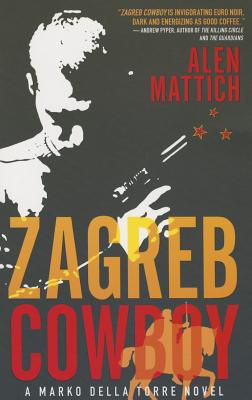 When Alen Mattich first left Croatia as a child, he (probably) had no idea that he would spend the next few years in exile, eventually settling in London with a career as a financial journalist. He also (probably) never suspected that, twenty years after becoming a citizen of the world, he would merge his experiences, those of his countrymen, and crime novel conventions in Zagreb Cowboy, a rollicking good ride through the black market wilds of collapsing Yugoslavia, just before its constituent parts embarked on years of nationalist and ethnic conflict.

There is no official moment when current events become history, losing their immediate emotional impact in favor of the perspective of distance. Is it five, ten, twenty, or fifty years, before we can bear to touch the wounds of the past, to process their long-term impact, and to preserve the experiences of the past in the fiction of the present? What form do these narratives take? Are they tragedy, bitter satire, or small, humanistic stories? In 2015, as we experience the twentieth anniversary of the official cessation of hostilities post Yugoslavian break-up, several novels, including at least three detective novels, set in former Yugoslavia have been released.

Phillip Kerr continued his Bernie Gunther series with WWII-era Croatia as part of his setting, in The Lady From Zagreb. Kerr dives into the conflict between the nationalist and anti-communist Četniks, the anti-fascist and communist partisans, led by Tito, and the Croatian fascist puppet government of Nazi-occupied Yugoslavia, the Ustaše. Ausma Zehanat Khan, a Canadian professional multi-tasker (novelist, media maven, human rights expert, etc.) released her debut mystery novel in January, The Unquiet Dead. The novel addresses the Srbrenica Massacre, asylum for war criminals, and the long-term impact of the conflict on its perpetrators and victims. Over in the general fiction section, Sarah Novic, in Girl At War, uses her own experience of exile to tell the fictionalized tale of a young woman’s return to Croatia and her experiences as a child soldier.

Zagreb Cowboy, while sharing a setting with the books listed above, chooses to focus not on emotional processing or revenge for deeds done. Rather, Mattich has a tear-it-all-down mentality to the Yugoslavian system. He fills the novel with fascinating and often humorous insights into how a corrupt and criminal system functions, then ceases to function, all in a very short time. The title is particularly apt, indicating the lawless, wild west atmosphere of a territory in between rulers.

His protagonist, Marko della Torre, begins the novel working for the Yugoslavian secret police’s internal investigations department. He sells the information he gathers to an outside source, who then uses the files stolen by Marko to blackmail government officials. When Marko’s business partner goes rogue and steals some dangerous information for himself, Marko must go on the run from several corrupt and powerful forces, including organized crime and the secret police.

Marko della Torre is Istrian, and has a rather blase attitude towards national affiliation. Della Torre remarks at one point in the novel that his grandmother managed to live in several countries without ever setting foot outside her home province, shuffled back and forth between empires throughout the 20th century. Della Torre’s wife is one of the last Jews left in Yugoslavia, and she doesn’t have a particular dog in the fight over Yugoslavia’s inevitable split either. Della Torre and his wife represent groups preserved by one empire, destroyed by another; casualties of nationalism, yet supporters of national autonomy.

A review from the Bowed Bookshelf blog called the novel “more than a little farcical,” and in all these novels that have been released so far this year, none other than Mattich’s have taken a satirical approach. The Lady From Zagreb‘s few scenes set in Croatia read a bit like a horror novel, and it’s focus on WWII-era Ustase war crimes provides a very different look at Yugoslavian dynamics than novels set during the post-Communist disintegration. Girl At War focuses on the tragedy of wartime experiences and the difficulty of returning home, while The Unquiet Dead takes a step back for a police procedural deeply concerned the long-term effects of genocide.

There’s a long tradition of farce and satire used by authors as the only way to make sense of the dogma of the totalitarian state or the chaos of civil war (see Bulgakov’s Master and Margarita, Gunter Grass’s The Tin Drum, or Orwell’s Animal Farm, just for starters). Mattich’s novel, through its cartoonish violence and absurd officials/criminals, fits right into this tradition. Zagreb Cowboy is also a classic gangster flick, with a complex plot, a series of unexpected reversals and setbacks, breakneck pace, and oh-so-satisfying conclusion.

By the end of Zagreb Cowboy you’ll be rooting so hard for the collapse of Yugoslavia, you won’t care what’s about to happen, and perhaps this is part of Mattich’s point – of course a large, multi-ethnic country dissolved into conflict after the end to a long, enforced period of cooperation and rule by a corrupt and repressive government.

You can find copies of Zagreb Cowboy on our shelves and via bookpeople.com. 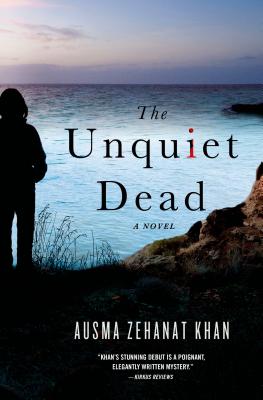 Ausma Zehanat Khan is a remarkable woman. She has a PhD in International Human Rights Law. She has traveled the world, taught at several universities, and worked as Editor in Chief of Muslim Girl Magazine. And now, she has written a detective novel. Not just any detective novel – Khan’s debut, The Unquiet Dead, synthesizes all her previous subjects of research and life experience into a moody and damning exploration of the legacy of war crimes and the experience of Muslims in Canada. The novel also explores child welfare, the history of Spain before the Reconquista, workplace romance, the enmity of old friends, and much, much more. The Unquiet Dead, like its author, is difficult to define in a single sentence.

The Unquiet Dead begins with an interrupted prayer. Detective Esa Khattack is head of Canada’s Community Policing Section, or CPS, a unit designed to handle cases sensitive to minority populations. He gets a call mid-devotion and goes to meet up with his partner, Rachel Getty, to investigate a suspicious death in a wealthy enclave.

Christopher Drayton, a wealthy retired businessman, has fallen to his death on the treacherous bluffs behind his garden. As Khattack and Getty begin their investigation into Drayton’s carefully constructed life, they find evidence that Drayton was concealing his true identity as a war criminal responsible for heinous and genocidal actions in Bosnia. But Drayton was none too popular in his assumed identity either, and Khattack and Getty must contend with an ever-growing number of suspects on their list, along with the nagging suspicion that Drayton’s death may have been an accident, as their investigation becomes increasingly complex.

Khattack and Getty have their own personal demons as well, and Ausma Zehanat Khan does an excellent job weaving her detectives’ personal stories in and out of the main narrative of investigation. Getty and Khattack work well together – Getty’s bluntness, pragmatism, and distaste for fashion mixes well with Khattack’s urbane and elegant demeanor; echoes of Holmes and Watson sound throughout the novel in the detectives’ interactions. They also serve as a cautious support network for each other; reluctant to share details of personal struggles for fear of damaging their working relationship, they nevertheless act with loyalty and support towards the other whenever possible.

Despite her well-realized main characters, Khan jumps from point-of-view to point-of-view, showcasing both her extraordinary empathy and her gift for psychological insights. Much of the novel draws on her research into wartime atrocities in Bosnia, and her novel contains several heart-breaking excursions into the Bosnian experience. Khan has done what many writers have done before her – she has learned the history of a people targeted for their identity, dehumanized, and massacred, and she has put the medium of fiction to work on their behalf, restoring individualism, humanity, and unique experiences, and creating an opportunity for readers to empathize with, not otherize, the experience of Bosnian Muslims.

Ausma Zahanat Khan taps into something that I’ve been thinking about for a long time – the power of literature to bear witness to human suffering, to condemn those who perpetuate it and those who do nothing, and to help readers come to terms with a past whose effects will not cease to linger, and should not. Fiction may be an escape for many. It certainly is not the same thing as reporting a physical truth. But fiction, unlike history, unlike statistics, unlike any fact, can bring to life voices that have been silenced – in other words, fiction can tell us an emotional truth. Fiction can turn a number back into a human being. Fiction can transform a buried and forgotten past into a haunting present. Ausma Zahanat Khan understands this, and that is why The Unquiet Dead is a stunning novel, a damning critique, and hopefully, the start to a long writing career.

Copies of The Unquiet Dead are available on our shelves and via bookpeople.com.