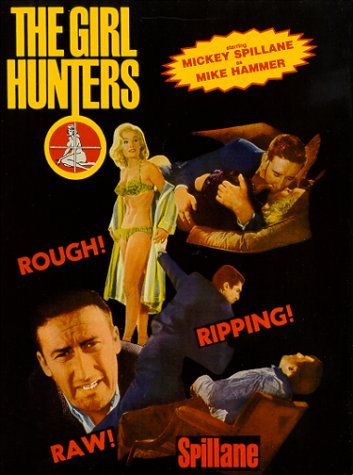 Our Hard Word Book Club will out our celebration of Mickey Spillane’s 100th year of birth to a climax. His two-fisted, forty-five wearing PI and angel of vengeance Mike Hammer paved the way for both Frank Miller’s Sin City and Lee Child’s Jack Reacher. We will be discussing the seventh Hammer novel, The Girl Hunters as well as view the film version that has an interesting leading man.

Spillane wrote The Girl Hunters after a nine year hiatus from the character. We find Hammer in the gutter, drunk and without work. When he learns his former secretary and true love Velda is missing and the quarry for a mysterious assassin known as The Dragon, he has to get his gun, license and attitude back to save her.

The film version we will be viewing presents something rare in an adaptation. It is one of the rare moments to where the author played their lead in the film version.Due to the planed actor falling out at the last minute, this is what happened with Spillane playing Hammer in The Girl Hunters, opposite future Bond lady Shirley Eaton. We will be showing the film as part of the discussion. We’ll be meeting on BookPeople’s third floor at 7PM, Wednesday March 28th. The book is 10% off for those planning to attend.