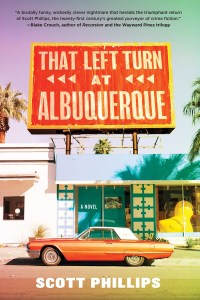 Scott Phillips is one of those authors other authors revere (or are downright jealous of). He often uses the crime novel as a frame for satire, but never lets his characters simply fall into types or symbols. His latest target is Southern California with attorney Douglas Rigby, who lost all of his money, actually his last client’s money, on a drug deal. To get it back, he hatches an art fraud scheme involving his wife, mistress, and a forger dealing with a painting owned by the client, Glenn Haskill, a t.v. producer in sixties and seventies with fond memories of his casting couch. The book is funny, profane, and engaging as all hell. Scott will be joining Jon Bassoff and Jason Pinter for our Crime Writing Outside The Lines discussion on March 16th, but went solo for this interview we did with him.

Scott Montgomery: You’re mainly known for covering the Midwest, what set your sights on L.A.?

Scott Phillips: I lived there for more than a decade. It’s really about Ventura and Santa Barbara than LA, about an hour to two hours away, depending on traffic.  I think I can only write well about places I’ve lived or spent lots of time. Parts of this one are set in St. Louis, where I live now. This was one I couldn’t have set entirely in the Midwest — the old TV producer, Haskill, wouldn’t have fit in, for one thing. Also the desperation of the real estate business and the equally desperate need for a certain kind of Southern Californian to maintain a level of conspicuous consumption.

SM: What is the major difference in writing about the two areas?

SP: There’s a certain kind of ruthlessness to life in Southern California, be it show business or real estate or the law or getting your kids into the right school.

SM: How did you come upon art fraud as the center of the story?

SP: I’ve always wanted to write a book about art forgery. Forgers like van Meegeren, the Vermeer forger who’s mentioned in the book, and Elmyr de Hory, about whom Orson Welles made his documentary F for Fake, have always fascinated me. Originally the book was much more about the forgery and the relationship between Paula Rigby and the old forger, but that didn’t work for me so I trimmed it way back and made it more of a crime novel.

SM: This crime novel has even more moving parts to it than The Ice Harvest and The Rake. How do you approach something like this without the characters being drowned out by the plotting?
SP: As I said, this book was originally much more about the forger and Paula, with the other characters being much more minor. When I started concentrating on the plot, each of the characters started taking on more heft. Because a character like Keith, the golf pro, becomes more important to moving the plot forward (one thing I always knew was that he and Rigby were going to have a beat down of some kind), I have to dig a little deeper and figure out what motivates him.

SM: Glenn, the old producer, is a character I like despite myself. How did you go about constructing him.

SP: One thing that I love about Southern California is the presence of the ghosts of Hollywood. I know and knew some old character actors, and they all had great stories about the old days in TV and movies. The fact is that predatory creeps like Haskill were all over the place then, and they’re all over the place now, as the Weinstein trial just demonstrated. Haskill’s not based on any one person, but there were lots of guys just like him. I wanted him to have a little kernel of humanity, which shows through his devotion towards his nephew back in the Midwest, a devotion that doesn’t work out very well for him.

SM: I was happy to hear that SOHO is also reprinting two of your earlier books, The Walkaway and Cottonwood. How would you describe these books, particularly

SP: The Walkaway is a followup to The Ice Harvest, more than a sequel. I started with the premise of the money in the satchel–what happens to that money? It all started one day when I was getting on the 405 freeway near the VA hospital (where my grandfather used to work as a barber) and I saw an elderly man in a suit trying to hitch a ride on the onramp. Later it occured to me that he might have been attending a funeral at the National Cemetery nearby, or he might have just walked out of the VA hospital. SO that was the hook: man with dementia walks out of a nursing home looking for some money he vaguely remembers having hidden years earlier. Cottonwood is the story of the Bloody Benders, serial killers on the Kansas prairie, and it’s also the story of the birth of a town. Its protagonist, Bill Ogden, is the ancestor of a lot of characters in my other books, mostly illegitimately. I’m really grateful to SOHO for bringing them back.

That Left Turn at Albuquerque is available for purchase in-store and online today through BookPeople. And be sure to catch Scott Phillips alongside Jason Pinter and Jon Bassoff for MysteryPeople’s Crime Writing Outside the Lines discussion of crime fiction on March 16th at 7PM!