Kari Bovee’s Annie Oakley series weaves whoddunit plots through different episodes of her life. Aided by suffragette reporter Emma Wilson, the legendary sharp shooter cracks the case and questions her place as a woman in her time. The latest, Peccadillo at the Palace, deals with her performance for The Queen with The Buffalo Bill Wild West Show and a murder of one of her emissaries. Kari was kind enough to talk to MysteryPeople about the series and her real life heroine. 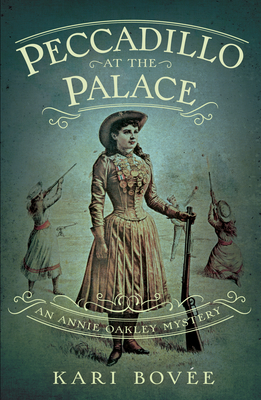 I saw a PBS American experience special on her and was impressed with her grit and determination. She had a difficult childhood, particularly after her father died when she was young. To help her mother, Annie taught herself to shoot game to provide food for the family. When she was a preteen, she was then sent to the Darke County Infirmary to learn how to keep house to be “farmed out” to another family to make money for hers. The couple she eventually worked for were abusive and she actually escaped from them after a year. That took some guts. Because of her shooting talent, she grew up to be incredibly famous, but she never forgot who she was and where she came from. She was the epitome of an empowered woman in her time, and I was very impressed with that.

She knew how to defend herself.

She cared about the welfare of others.

When a slanderous story was printed about her in the Hearst papers and distributed throughout the country, she spent eight years fighting to get the stories retracted, and was successful. She was interested in fighting to expose the truth and seek justice.

I wanted to create a “side-kick” for Annie who was a bit more worldly and more sophisticated than she is. Someone who came from quite a different background and upbringing. Emma was raised an American blue-blood, and while she likes the finer things in life, she rails against the stuffiness and snobbiness of her parents. While Annie is concerned about always doing the right thing, Emma takes more risks. She’s a rebel with her suffragette causes and uses her position as a journalist to get to the truth. Because she is an investigative journalist, she has connections that help Annie to solve the crime. Also, she provides a bit of comic relief. She’s quirky and fun. I just love her!

Annie and the Wild West Show did actually go to England to perform for the Queen’s Jubilee, and Annie did have the honor of meeting Queen Victoria. They set up their encampment at the Earl’s Court in London.

In 1887, there was much unrest with the Irish that Victoria and her cabinet was constantly dealing with. India also had a love/hate relationship with the British and the Queen. I took that information, and then created the story.

For me, it was exciting. I am an Anglophile, and have dabbled in the study of British history since college. I’ve been to England three times, so I am a little familiar with the palaces and places I’ve put in the novel. I also read a lot of historical and contemporary novels set in England, and watch BBC movies and television shows voraciously. I hope I have portrayed the flavor of what London might have been like in 1887.

Right now I am working on the third full-length novel in the series called Folly at the Fair. It takes place in 1893 when the Wild West Show went to the Colombian Exhibition or World’s Fair in Chicago. I’m having a blast with it!