The Name of the Game Is Death is considered one of the hardest of the hard hard boiled. It’s right up there with Paul Cain’s Fast One, packed with action, tough guy dialogue, and dangerous dames. What really makes it quintessential to the genre is the hard case at the center of it. 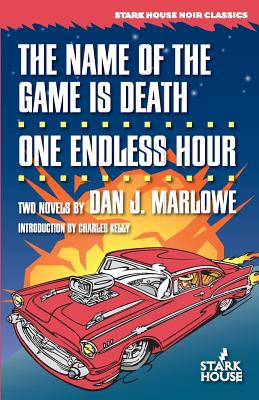 A bank robber going by the name Earl Drake, admitting it’s not his real one, is introduced to us in the middle of one of the most exciting robberies put on paper. The job goes haywire when the getaway driver loses his cool. Earl gets shot in the arm and tells the only other survivor, Bunny, to take the money and send it to him in thousand dollar increments. When the cash quits coming, Earl goes to the return address in Hudson, Florida under the guise of a tree surgeon to find out what happened to Bunny and the loot. While digging he gets involved with the local barmaid and later on a blond post mistress tied to a sociopathic sheriff’s deputy who apparently climbed up from the Jim Thompson novel below on the spinner rack. The result is a hard boiled masterpiece that leads to an ending that could only be in a fifties or sixties crime paperback and sets us up for the even more violent sequel, One Endless Hour.

Earl Drake or whoever he calls himself at the given moment is the perfect anti-hero narrator. Like a shark he constantly moves through the story and we’re always aware how dangerous he is. He has a talent for trouble, no respect for the law, and outside of animals, little love for anyone. Even his back story from childhood up to the day of the fateful robbery is told at a quick clip and wrung of any sentimentality. However, Marlowe provides just enough human shading to avoid his falling into a tough guy parody. His narration provides the book’s drive as well as observations like “I’ve been around x-ray machines that couldn’t see as deep into a man as a woman’s eyes.”

Stark House Publishing has put out The Name of the Game Is Death in an omnibus with One Endless Hour with an introduction by Marlowe biographer Charles Kelly who tells us about the author’s own amazing true life story. Both crime novels are tight and terse with tough guy personality to spare. Dan J. Marlowe and his man Earl Drake are tarnished angels taking you to hard boiled Heaven.