Thanks to author A.R. Ashworth for writing this guest blog post, a conversation with his character DCI Elaine Hope. Ashworth will be in the store Friday, November 2nd at 7pm. 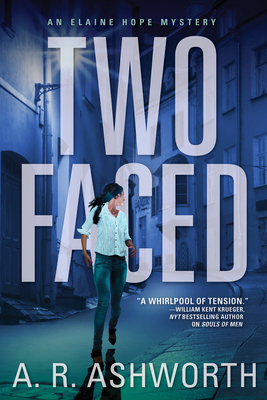 Detective Chief Inspector Elaine Hope runs a Murder Investigation Team in the London Metropolitan Police Service. A.R. Ashworth has written two thrillers about Elaine’s cases: Souls of Men and Two Faced. He’s currently working on the third novel in the series. In early October he sat down for a conversation with Elaine. True to form, she took control almost from the start.

A.R. Ashworth: Thanks for making time, Elaine. I know you’re busy with a new case.

Elaine Hope: I am, but I owe you. You invented me. This won’t take long, will it?

AA: It shouldn’t, but with you I never know. Tell me why—

AA: I’m certain that’s not why I write about you.

EH: You live in Texas but your stories are set in London. You’re a man, writing about a woman. From what bourbon-soaked, cob-webbed corner of your brain did you conjure me?

AA: Some days I wonder that, too. You’re asking me to explain myself. I don’t think I need to; my stories stand on their own. But here’s a synopsis. I’ve spent a lot of time in London, been to the locations in the books, drank in the pubs. Besides a few mystery writers and some barmen, my Brit friends include two retired Met detectives. I got hooked on Dorothy Sayers back in the ‘70s because her writing was richer and deeper than Christie or Marsh. I’ve loved the darker British-style mysteries ever since. And female authors write about male protagonists all the time.

EH: Sayers. You once told me I have a bit of Harriet Vane in me—that I don’t need a man in my life, but I’ll listen if he makes a good case. I fight the male establishment but I’m not Jane Tennyson in so many ways.

AA: I wasn’t thinking of them when I created you. Maybe Harriet Vane a little, with Peter. But as I got to know you, I saw a few similarities. You’re gritty, strong, assertive, but never a bitch. You can be vulnerable, but never a victim. You evolve and learn on-the-fly. You never back down.

EH: You can tie a ribbon ‘round that. What were you thinking, making Peter the protagonist in the first draft of Souls of Men? I’m glad we had that talk.

AA: We? You did all the talking. I nodded and rewrote it, didn’t I?

EH: You admitted it. Peter’s a helluva guy, but it was me you turned loose on the Srecko brothers. Reviewers said Souls of Men was a strong, smart debut. Gritty, dark, satisfying. You can thank me for that. I don’t tolerate violence against women, and you dumped me right in the middle of those toerags. Talk about gritty and dark. One reviewer compared me to Stieg Larsson’s Lisbeth Salander. She said we’ve both seen the worst. You were damn hard on me.

AA: That was Karen Keefe from Booklist. You handled it.

EH: Yeah, the world’s full of surprises, innit? It changed my life. In Two Faced I was set on revenge, running a rogue investigation, screwed up with PTSD. Thanks for Fiona. She’s even more messed up than me, but she’s the friend I need. Barefoot Woman. That was a hoot.

AA: I gave you Peter, too. How’s that going?

EH: I miss the hell out of him. Long-distance affairs are hard, even without a six-hour time difference. He plays Sam Cooke songs to me when we Skype, so I think we’re solid. I just hope he won’t go ballistic when he hears—

AA: Stop! We agreed no spoilers. Can you tell me something about your current case?

EH: The one you’re calling If I Can’t Have You. I’m back from compassionate leave, running a murder investigation team, up to my eyeballs in—say, can you give me a hint about who wants to kill Tessa? Didn’t think so. And I’m dealing with that other, erm, possibly ballistic situation. I have a lot on my plate.

EH: I couldn’t be anything else. People need justice. Need the Met. Need me. Time to get back to the nick. You’ll see me tomorrow afternoon. We’ve got scenes to write.