David Joy caught our attention with his brutal and poignant debut, Where All Light Tends to Go, hailed as a modern classic in the growing genre of rural noir. His next book, The Weight of the World, is our MysteryPeople Pick of the Month, and comes out today! David Joy was kind enough to answer a few questions about his latest book and his philosophy of writing. 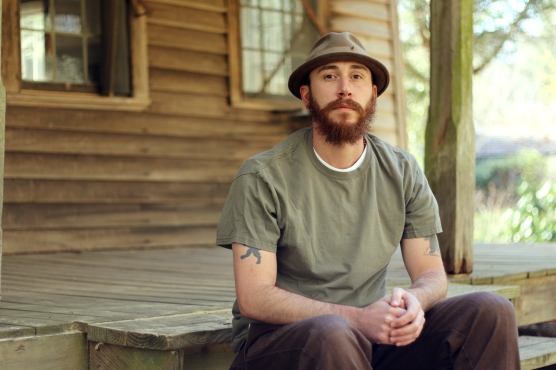 MysteryPeople Scott: The Weight Of This World deals with three characters on the bottom rungs of society who’ve made some bad life choices, but you never feel like your look at people in a white trash zoo, you have an understanding of them. Can you talk about how you approached Thad, Aiden and April?

David Joy: I remember one time hearing George Saunders say, “Fiction is empathy’s training wheels.” That idea has always stuck with me. I think the most important job I have is to show the humanity of every character I write. When you’re telling the kinds of stories I tell about the types of people I’m writing about, you carry a tremendous obligation to get to that humanity, and that’s not an easy thing to do. We’re talking about drug addicts and thieves, people capable of committing horrifying acts of violence. We live in a world where we’re able to put a great deal of distance between “us” and “them” for the sake of comfortably. We live in a word where it’s easy to demonize those people, to say to ourselves, “I’m nothing like them.” The problem with that is it leaves little room for dislodge, and without conversation you can never address a problem. I was reading a review recently and a woman said, almost angrily, “He made me care about these people!” That’s about the highest compliment I could ever hope for. I made them care. The reality is, as much as I wish it weren’t true, that’s a very hard thing to do.

MPS: Relationships are the driving force in your novels. What is important to you about how your characters interact with one another?

DJ: I think it’s one thing to be inside the head of a character, but another thing altogether to see how a character reacts to others. A lot of times people can lie to themselves, but when they’re backed against the wall and they either have to do something for someone or don’t do it, tell the truth or lie, that’s when you really get to the deepest part of the human condition. At the end of the day, it’s a matter of how we interact with the people around us, the people closest to us and the people we don’t know from Adam. I think that’s the role relationships play in a novel, and as a writer those are the moments when we get to see our characters stripped down to exactly who they are. That’s sort of the ultimate test.

MPS: Thad is a war vet who is finding peace more difficult to deal with than combat. What did you want to get across to the reader about the men who have returned from our recent conflicts?

DJ: This book is very much a story of trauma and post traumatic stress, and not just Thad’s, but April’s and Aiden’s as well. These are three lives governed almost entirely by their pasts. With Thad, I knew that he would commit an extreme act of violence, but I didn’t know why. As I sat with that, I started to realize that he had a lot of similarities with a really good friend of mine who came back from war and wound up walking into his house, shooting his father and brother, and then killing himself. In an attempt to understand why, I read a lot of books on combat veterans. I remember reading a story about a Royal Marine who was being tried for murdering a Taliban insurgent. They described how paranoid he became in trying to survive in a place where he knew if he were captured he’d be skinned alive and beheaded. The testimony talked about patrols where the Marines would encounter body parts of soldiers strung from trees. All of these stories hit hard and I think I just kept wondering how a person could witness something like that and not have it affect the rest of their life. I couldn’t imagine it. What happened to my friend or to that Royal Marine, that’s not the truth of every veteran, or even combat veterans, and that’s part of what makes trauma such a hard thing to understand. It’s so individualized. I was interested in what happens when a person can’t cope with their past, can’t rectify the things that they’ve done and seen. That became Thad’s story.

MPS: The violence in your work is believable and brutal. What do you think is most important in depicting it?

DJ: I read something recently, an interview with a visual artist named Alfredo Jaar in the Los Angeles Review of Books, and he said, “Violence is our present condition.” I think that’s an incredible statement. If a book’s not confronting issues of racism, misogyny, and violence then I have hard time recognizing it as modern American realism. Turn on the nightly news and convince me otherwise. So with this novel I was very interested in the idea of violence as an affect, in that Martin Luther King Jr. notion that, “violence begets violence.” This story is filled with moments of incredible brutality. Some readers won’t be able to take it and that’s okay. That’s part of what I was trying to do was to play with that idea and to test that threshold. One of the things that interests me most is how we see a story on the news and can’t imagine what would bring someone to kill another person, but when it comes time for punishment we respond with a ruthless retaliation that mirrors the very nature of what we’re condemning. There are moments when we’re disgusted by violence and moments when we cheer it on with a murderous vengeance. I’m interested in where that line lies, and that’s one of the biggest chances I took with this book was to test that boundary. I want to know when you turn away, and I want to know when you applaud. In regards to how the violence is portrayed, I think that’s a very fine line to walk. You show too much and the reader turns away. You show too little and they dismiss the horror of it. I try to think about what’s needed to accomplish what I want a scene to do, and that’s how I decide whether to go all in or pull back. I don’t want anyone to ever say that what I put on a page is gratuitous. If a reader can say that, I’ve failed.

MPS: What do you hope the reader sees about Appalachia in your writing?

DJ: This is a really big question for me, one that I don’t think I can capture in a paragraph or two, but I’ve written about it before. I’d like to share this essay I wrote titled, “One Place Misunderstood,” that first appeared at Writer’s Bone and was later republished at the Huffington Post. I think it answers this question about as openly as I could hope.

MPS: I’m already looking forward to the next book. What can you tell us about it?

DJ: Most of my work tends to start with some sort of narrative trigger. In The Line That Held Us, a poacher goes out into the woods after a deer and accidentally kills a man who was digging ginseng. He recognizes he’s killed a member of a family notorious for vengeance and violence. With nowhere to turn, he calls on the help of his best friend, but when the victim’s brother comes looking, a blood trail leads to a nightmare of revenge that forces each to recognize what they’re willing to sacrifice and for whom they’ll lay down their life. Ultimately, another feel-good book is what I’m getting at. I’m doing my damnedest to wind up on some sort of “Twelve Books That Will Lift Your Spirits” list.

You can find copies of The Weight of this World on our shelves and via bookpeople.com.