1. The Mother by Yvette Edwards

Yvette Edwards tells a moving tale from a complex perspective in this story of murder and consequences in London. Eight months after 16-year-old Ryan is stabbed to death by another teenager, his killer goes on trial, ready to protest his innocence. Ryan’s mother, and her sister Lorna, are torn between their search for justice and their empathy for the teenager on trial. The outcome of the trial comes down to the testimony of a vulnerable teenage mother previously involved with both Ryan and the defendant, and after amping up the action in the last third of the book, Edwards provides a hopeful conclusion. One of the most necessary and moving books of the year.

This book is twisted! Frustrated by a lack of fulfillment in his imaginary relationship with a cadaver, a young medical student kidnaps a writer named Clarice and takes her on road trip through Brazil. From locking her in a suitcase to forcing her to accept his edits to her novel, the doctor-in-training makes Clarice’s life hell, all while justifying his actions to the reader in increasingly bizarre and sometimes comical ways. After several reversals of power, the ending will leave your mouth agape. As funny as it is disturbing!

3. The Glorious Heresies by Lisa McInerey

When Maureen accidentally kills a burglar, she turns to Jimmy, her criminal boss son, to cover up her misdeed. He hires Tony, an alcoholic with a  mess of kids, to help him dispose of the body. Tony passes the stress of his guilt on to his eldest son, drug dealer Ryan, who just so happens to occasionally sell to Georgie, a prostitute and the dead burglar’s ex-girlfriend. As the years go by, Maureen’s act of violence has sweeping consequences played out amongst a host of quirky characters. Part playful send-off of religious hypocrisy, part crime novel, and part tearjerker drama, The Glorious Heresies has something for everyone!

4. The Trespasser by Tana French

Tana French’s latest is her most carefully plotted yet, with a feminist denouement that should convince any reader that chivalry (if not dead already) should certainly die soon. Detective Antoinette Conway is having a hard enough time in the boys club atmosphere of the Dublin Murder Squad when she’s assigned an unusual case. A generically beautiful young woman is found murdered in an oddly blank apartment, and its up to Conway to reconstruct the victim’s personality, as well as her last days. Her colleagues don’t seem to want her to solve the case. Are they trying to sabotage the lone woman in their department, or are they hiding something more sinister?

After a Jehovah’s Witness is murdered in Paris in a suspiciously ritualistic manner, two French detectives, one Jewish, and one Briton, investigate the potential involvement of a multi-cultural cast of characters, including the murder victim’s rather attractive Muslim neighbor. Is ideology at fault, or the more mundane realities of the criminal underworld? The playlist at the back of the book proves that Miské’s foray into detective fiction is one of the coolest books of the year!

6. The Language of Secrets by Ausma Zehanat Khan

Khan launched her Community Policing series last year with The Unquiet Dead, wherein sexy poetry-quoting detective Esa Khattack and his ice-hockey playing partner Rachel solve a murder in a Bosnian community. In Khan’s second novel, the shadow of historical trauma that defined her debut has been supplanted by the unease of the present. The Language of Secrets follows Esa Khattack as he reluctantly agrees to aid in the take-down of a terrorist plot, after a friend of his, Mohsin, is murdered by the cell while undercover.  His team refuses to share essential information with Khattack, including the fact that the leader of the terrorist cell has just become engaged to Khattack’s sister Ruksh. Moreso than her debut, The Language of Secrets hones in on the uncomfortable tightrope walked by those in law enforcement recruited to surveille their own communities.

Both of these books combine alternative history and murder mystery for stories full of ideas and excitement. A Man Lies Dreaming follows Hitler the Private Detective through his days working cases for German exiles in Britain after Germany goes Communist in 1933, and is the perfect volume to read post-Brexit. Judenstaat is set during the fiftieth anniversary of the Soviet Jewish State of Saxony (a combination of the histories of Birobidjan, East Germany, and Israel) and uses an archivist’s search for her Saxon husband’s murderer as a jumping off point to explore the meaning of states and people.

8. What We Become by Arturo Perez Riverte & The Case of Lisandra P. by Hélène Grémillon

In Perez-Riverte’s latest, What We Become, a tango instructor and thief makes his way across the oceans and continents, stealing hearts and diamonds along the way. In French writer Hélène Grémillon’s Argentinian-set The Case of Lisandra P., a psychiatrist’s wife throws herself to her death, her husband is arrested for her murder, and he recruits one of his patients to clear his name. I’ve paired these two for their shared focus on the long shadows of history, as well as their Latin American settings.

9. The Murder of Mary Russell by Laurie R. King and Murder on the Quai by Cara Black

Two of my favorite series writers both came out with prequels this year – and both are fantastic! The Murder of Mary Russell takes us into Mrs. Hudson’s past for a novel that is sure to please fans of the series, as well as fans of William Thackeray and Charles Dickens. Murder on the Quai dives into Aimée Leduc’s first case and departure from medical school, and gives us a bit more information about her mysterious parents.

Ed Lin’s second Night Market mystery is just as delectable as his first! Follow the novel’s Joy Division-loving protagonist as he gets saddled with taking care of his 16-year-old cousin by his gangster uncle. In his latest, Lin provides us with a fantastic exploration of politics, food, family, and of course, the criminal underworld.

The Dove’s Necklace by Raja Alem

A young woman is found murdered in the back alley of a Mecca neighborhood, and the detective assigned the case refuses to identify the body, content to grow obsessed with the case and with the corpse. The neighborhood itself is threatened with demolition, as the city wishes to replace the slums of Mecca with high-rises catering to pilgrims. Will the various quirky characters inhabiting the Alley of Severed Heads learn who among them has met an untimely end before the neighborhood itself collapses? 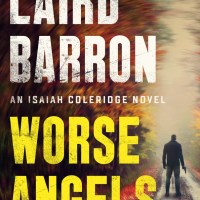