Mette Ivie Harrison, with her Linda Walheim series, has made it into our top lists and our hearts. Each installment of the series so far has been an MysteryPeople Pick of the Month, and Harrison’s third, For Time and All Eternities, is no exception. Mette Ivie Harrison joins us Monday, January 23rd, at 7 PM, to speak and sign her latest. 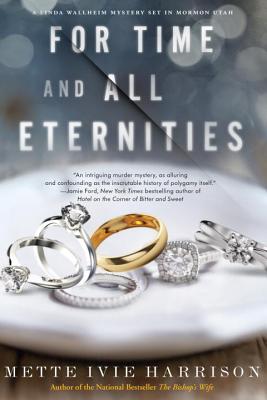 At the start of For Time and All Eternities, Mette Ivie Harrison’s third installment of her Linda Walheim series, the Mormon bishop’s wife is stunned when her son Kenneth announces his engagement to Naomi, a girl he met only a few months ago.  The surprise gives way to dismay when she learns that Naomi’s family practices polygamy—a practice the Mormon Church has officially disavowed, but which Linda is aware still thrives among certain fringe groups of fundamentalists.  Despite their reluctance, she and her husband Kurt accept an invitation to visit their future in-laws at their remote family compound.

Not long after they meet patriarch Stephen Carter, Linda begins to feel that something is terribly wrong at the compound–each of Stephen’s five wives appears deeply troubled.  While Linda is repelled by the concept of plural marriage, she finds herself unexpectedly sympathetic to the plights of the women and their combined 22 children.  Before Linda can find any convincing evidence of possible wrong-doing, a family member is found brutally murdered.  Afraid that law enforcement might take advantage of the wives’ naiveté, Linda agrees to stay at the compound until she can identify the murderer.

Harrison is herself a practicing Mormon, but one who has admitted to struggling with some of the Church’s teachings—in fact, she spent 5 years living as an atheist within the LDS community.  That experience gave her a unique perspective on the teachings of the Mormon faith and its followers, and that has informed her series with a rare authenticity.  The reader doesn’t just get an exciting and well-crafted mystery—he receives a rare glimpse behind the secretive curtain of the Mormon Church and a balanced portrayal of a faith that still speaks to the hearts of its followers while wrestling to remain relevant within a rapidly changing society.

“For Time And All Eternities” is the 3rd installment in the Linda Walheim mystery series, and comes out January 10 – pre-order now! Harrison joins us Monday, January 23rd, at 7 PM. Can’t make it to the event?  Pre-order signed, personalized copies!