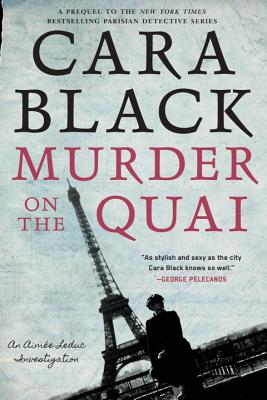 I’ve followed Cara Black and her oh-so-stylish detective, Aimée Leduc, throughout Black’s Paris-set series, as the Leduc Detective Agency solves many a case and Aimée’s wardrobe acquires many a Chanel suit. Her new addition, Murder on the Quai, should delight long-term fans and newcomers to the series alike! Cara Black will be at BookPeople this Thursday, June 23rd, at 7 PM, to speak and sign her latest. She’ll be joined by Texas author Lisa Sandlin for a panel discussion on private eyes from Paris to Beaumont.

Murder on the Quai takes the reader back to Aimée’s med-school days in 1989, before her decision to join her father’s detective agency as a partner. A woman claiming to be a distant relative of Aimée’s mother comes to the Leduc Detective Agency seeking information about a string of killings. Aimée’s father refuses to investigate, instead undertaking a mysterious mission to Berlin. In her father’s absence, Aimée accepts the case, hoping to discover more information about her mother, and to distract herself from an increasingly frustrating med-school experience. Aimée’s 1989 case slowly dovetails with a series of flashbacks to rural France during WWII, in which several farmers attempt to combine resistance to fascism with a quest for personal gain, triggering terrible consequences.

Cara Black has done her fans a service with an excellent prequel that answers many of her series’ biggest questions, including, finally, the reason for Aimée’s mother’s disappearance. The 1989 setting is used to great effect – Black portrays a moment in French history stunned by the end of the Cold War and torn between past crimes, and historical legacies and future dreams.  As always, Black excels at mixing Parisian fashion with PI gadgets – even in her youth, Aimée Leduc is a tough and stylish heroine ready to sick her bichon frise on anyone who crosses her.

You can find copies of Black’s latest on our shelves and via bookpeople.com. Cara Black joins us here at BookPeople this Thursday, June 23rd, at 7 PM. She’ll be joined by Texas writer Lisa Sandlin for a panel discussion of two very different private investigator heroines.