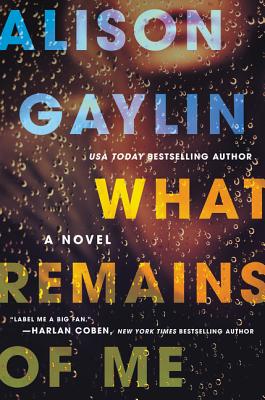 Celebrity crime and scandal provide an interesting yin and yang. Even for a life led in public, there are things we don’t see in the shadowy edges of the spotlight. The new television show The People Versus O.J. Simpson: American Crime Story layers a previously untold narrative over reported facts in a new version of one of the most over-reported trials. Alison Gaylin deftly explores this contrast between public face and private life, although with very different characters, in What Remains Of Me.

The book operates on two time lines. In 1985, troubled teen Kelly Lund is found guilty of shooting director John McFadden at a party in the Hollywood Hills. 25 years later, and three years after Lund’s release from prison, Kelly once again faces accusation of the murder of a celebrity when Sterling Marshall, Kelly’s famous actor father-in-law, is found floating in the pool, shot in the head. Upon discovery of the murder, eyes quickly turn to Kelly.

As Kelly tries to prove her innocence, more evidence points to her. Police and media close in around her and those involved with the McFadden shooting. As we go back to 1985, we slowly learn how the new murder connects to the old one; we also learn of the friendship Kelly had with Bellamy, her sister-in-law, that dissolved after the McFadden shooting.

Gaylin dives into the lurid subject matter, exploring its psychology and humanity. She avoids directly ripping from the headlines, yet captures the mood of hysteria, excess, and suspicion involved with the celebrity scandals we know. This way, we can focus on her characters beyond parallels to such disobedient stars as Roman Polanski or Lindsey Lohan. She shows how fame untethers people from reality and, in turn, morality. The book has echoes of Ross MacDonald’s Lew Archer PI novels with its labyrinthine plot full of the secrets and transgressions of well-to-do families. Here, there is no tarnished knight detective to restore moral order. Here, everything collapses from the inertia of time and collected sins.

What Remains Of Me is a smart multi-layered L.A. thriller with the range of emotion to match. It uses its setting perfectly, with the dream factory creating a nightmare for all to see. As Gaylin shows us, there is something even darker behind that.

You can find copies of What Remains of Me on our shelves and via bookpeople.com.