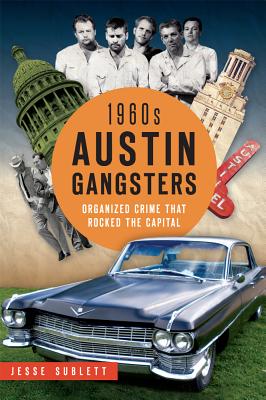 The essential Jesse Sublett – writer, musician, and Austin institution – will be joining us again for tomorrow’s Noir At The Bar at Opal Devine’s, where he will read from his latest, 1960s Austin Gangsters, and perform some deliciously creepy murder ballads. Thanks to Jesse, John Schulian – sportswriter, screenwriter, and now, with his debut novel A Better Goodbye, crime writer – will be joining us as well.

Noir at the Bar starts at 7 PM at Opal Divine’s at Penn Field. This event is free and open to the public, and we will have copies of each author’s latest for sale at the event. Joe R. Lansdale, author of the Hap & Leonard series, and the best thing to come out of East Texas since Janis Joplin left Port Arthur, will be reading from his latest Hap & Leonard, Honky Tonk Samurai. Local author George Wier will also be joining us to read from and sign his latest novel, Errant Knight, set in downtown Austin.

We caught up with Jesse to see how things were going with his latest book, 1960s Austin Gangsters: Organized Crime That Rocked the Capitol, his music, and life in general.

“My favorite expression is “It sure beats working.” That’s how I feel about music, writing, and art, even though a lot of labor is involved—suffering and frustration, too—but the love of doing it removes the sense of it being work. I’ve always said that criminal characters and musicians (and other artists) are alike in that they just can’t see themselves going the day job route.”

MysteryPeople Scott: 1960s Austin Gangsters was released last year, and interest in the novel is still going strong. What has the book brought to you after its release?

Jesse Sublett: It’s astonished me that a book published 11 months ago still has momentum and still brings people to me, telling me how much it means to them, that they just bought a copy for their dad, or they bought ten copies for the family. People keep bringing me new stories about the Austin crime and vice scene of the 1960s. I’ve been meeting retired cops, children of notorious gangsters and thugs, who are proud that their family members have been authenticated by my book.

MPS: In the book, you drew some conclusions to some shady characters. Doyou look over your shoulder more often now?

JS: I did think carefully about the danger involved, especially in writing about some crimes for which charges had never been filed and almost no one was talking about. At first I was concerned that some of the Dixie Mafia characters in the book might show up at my doorstep or accost me in a dark parking lot. Now I’ve learned that it’s far more likely that their grandson, great nephew, or whatever, might ask me to sign their book.

MPS: You’re introducing your friend, John Schulian, to our Noir At The Bar crowd. What will people dig about his writing?

JS: John Schulian is a great writer, period. When introducing him, I want to say, This guy has written some of my favorite books about boxing, and that means a whole lot to me, but he’s also a hugely successful screenwriter going back to Miami Vice, he’s been sports journalist forever, and NOW he’s written a full length crime novel. But you know what, he’s just a great guy, hugely knowledgable about a vast number of things, he’s a fan of Austin and Austin music going back to the Armadillo days. And then you come back to the fact that, man, this guy can write!

MPS: You also released a new album. Did you have particular direction with it?

JS: I think my fans can see that my new EP is of a part with my noir and picaresque sensibility, in a musical format, and I think if fans of my writing listen to it, they’ll feel the same vibe. I’ve always — I mean, going back to childhood — been a kind of multi-format guy. I started becoming obsessed with both blues and crime novels and writing at the same time, when I was an adolescent with an after school job at a drug store that had a huge paperback rack. Right now I’m playing music that I’ve kind of aged into like aged whisky — it’s stuff that I wasn’t good enough to pull off in my tender years. I love playing more than ever, even though you won’t see me in the clubs very often.

MPS: What is the biggest thing crime fiction and rock n’ roll share?

JS: My favorite expression is “It sure beats working.” That’s how I feel about music, writing, and art, even though a lot of labor is involved—suffering and frustration, too—but the love of doing it removes the sense of it being work. I’ve always said that criminal characters and musicians (and other artists) are alike in that they just can’t see themselves going the day job route. They feel that they’ve been dealt a certain hand by fate, that either they are too good or too fucked up to go the conventional route. I’m somewhere in between; I realize I’m not the best writer or musician out there, but I’ve been living this life too long to do anything else.

Come by Opal Divine’s at Penn Field on Tuesday, February 16th for an evening of booze, books, murder ballads from Jesse Sublett, and readings from Joe R. Lansdale, John Schulian, George Wier, and Jesse Sublett. The event starts at 7 PM.