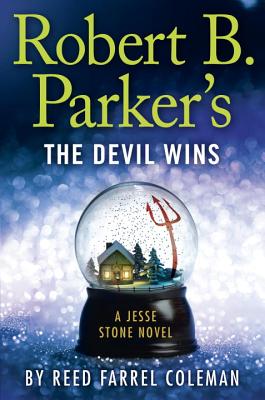 In Robert B. Parker’s The Devil Wins, Reed Farrel Coleman’s second outing with Parker’s character Jesse Stone, the Paradise, Mass. police chief discovers a fresh body with ties to two girls gone missing decades before. The girls were friends of Stone’s deputy, Molly, and her past becomes tied to the case. It is a blend of aesthetics between creator and the author carrying the torch. The final passage reminded me of something the great Ross McDonald would write. We caught up with Reed to talk about the book and how the series has developed.

MysteryPeople Scott: Much of The Devil Wins revolves around Jesse’s deputy, Molly, and an incident from her past. What made you want to put the spotlight on her?

Reed Farrel Coleman: One of the aspects of my job in taking over the series is to work within the spaces that Bob Parker left me to operate in. One of the areas I believe Mr. Parker would have eventually delved into is the lives of Jesse Stone’s supporting cast. In his Jesse novels he has touched upon the lives of Molly, Suit, and Captain Healy, but never very deeply. I thought this was a great opportunity to see Molly, one of the very popular characters in the series, in a different light. As someone and something more than Jesse’s foil for wisecracks and banter.

MPS: One of the biggest themes of the book is regret, something many of your past characters have dealt with and carried. What draws you to that emotion?

RFC: As all humans have certain comfortable areas to work in, so too do writers. I understand characters, all characters from the inside out. And what defines a character or a person? His or her emotions. And one of the great defining emotions we all share is regret. The regrets change from person to person, but the emotion itself is so powerful, so resonant with all humans that it is a natural place for me to go.

MPS: I picked up Stone Cold after reading The Devil Wins, and Jesse seemed more angry in that earlier book. Do you think he’s come more to terms with things since Parker first created him?

RFC: I think this is a great question, Scott. The simple answer is yes. Jesse has settled down and worked on his issues. He has been in Paradise a long time and has basically worked through his issues with Jenn. He has accepted his drinking will always be a part of his life. He has Dix in his life to talk things over with. He is further away in time from his troubles in LA. But oddly enough this is an area where some fans of the series have given me the most pushback. It’s hard for them to accept Jesse’s changes whether introduced by Bob Parker, Michael Brandman, or me. But people grow and change. Sometimes for the better. Sometimes not. Usually it’s a mixed bag. If you can’t have a character evolve and he must remain static, you are simply rewriting the same book over and over again.

MPS: Has his relationship with alcohol changed?

RFC: I think alcohol is a struggle for Jesse and will always be one. But I believe Jesse now is more honest with himself and the world about his love affair with Johnny Walker Black. And by acknowledging his struggles, he has taken away some of the alcohol’s power and magic.

MPS: What do you have to keep in mind when writing about a small town like Paradise?

RFC: I think anyone who reads Robert B. Parker’s The Devil Wins will understand a lot about small towns. And I hope they’ll understand that I understand small towns too. Although I grew up in Brooklyn, I’ve lived in a small town on Long Island for more than twenty years. What I always keep in mind is the local nature of things. The fact that in small towns a lot of people know each other, but don’t know a lot about each other though they think they do.

MPS: You’ve stated before that you are not trying to copy Robert B. Parker, but is there anything that he brought to the series that you hope your progression of it will retain?

RFC: Hard question for me to answer because I am always juggling a lot of things at once: fan expectation, considering what Mr. Parker might have wanted, keeping the series fresh and growing, and keeping myself interested. As I have grown more comfortable with the series and the characters I find that I am growing backwards into a comfort level with Bob Parker’s physical style. In other words, in Blind Spot, I didn’t feel compelled to keep all the chapters at the preferred three page length. But in this one, I tried much harder to keep the chapters as short as Bob did. And what’s odd is that by doing so, my writing is more reflective of Bob’s in this one than in the last one. I will never copy his style or sound just like him, but I think there will be a convergence in time.

You can find copies of  Robert B. Parker’s The Devil Wins on our shelves and via bookpeople.com.