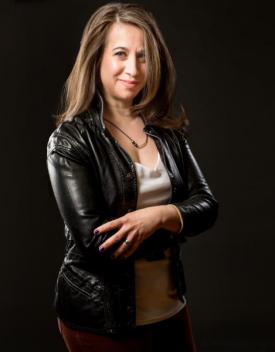 Jenny Milchman writes thrillers, and she writes them extremely well. Her latest suspense novel, As Night Falls, is a home invasion novel with a twist (well, several twists). Two escaped convicts take shelter in a wealthy family’s home during a winter storm, holding the family hostage until they can make their escape. Interspersed between episodes of the family’s harrowing ordeal are increasingly disturbing scenes from a different family, set in the 1970s.

Milchman lives most of the year in the Hudson River Valley, but she’s consented to visit us down here in Texas in the heat of summer, and we thank her for that. Jenny Milchman will be speaking and signing her latest novel here at BookPeople on Monday, August 24th, at 7 PM.

Molly O: So, while I was reading As Night Falls, I couldn’t stop thinking about how, well, Scandinavian an upstate New York setting can feel in a detective novel, especially when there’s so much modern architecture involved. Do you feel a kinship to the Scandinavians?

Jenny Milchman: I admire the Scandinavian writers—especially, as you suggest, the sense of place and atmosphere they create—but I actually don’t feel a kinship with them. The opposite, in fact. There is a bleakness to the novels to which you’re referring, whereas in my own work…Well, perhaps this will best explain things. Every now and then I get a letter from a reader that says something like, “What a dark, twisting tale.” And I’ll think, “Really? Because it seemed pretty joyful and upbeat to me.” And then someone will point out the subject matter: suicide, people vanishing, marriages unraveling, home invasion, the slimy underbelly of family secrets. And I’ll have to admit that yeah, my stories are kinda dark. But when I’m writing, they’re not. Instead they are stories of heroes or heroines made. People whose weaknesses would’ve eventually undone them, had the events of the story not happened. I write to a point of redemption, a high note. I hope that people who read my books will find that they come to a better place at the end. And I think in a deep sense that may be the opposite of what the Scandinavians are brave or dastardly enough to dare.

MO: What does winter mean, to a detective novelist?

JM: Winter is setting, mood, atmosphere in fiction. With Cover of Snow, my debut novel, I wanted the seven month Adirondack winter to be a character in the story. But to a mystery or thriller writer in particular, winter is threat. There are dangers that are unique to winter—freezing to death, falling through ice, getting snow-blind and becoming lost. There are also things that can’t be done because it is winter. A quick run outside to follow up on a clue or talk to someone who might know something takes on the nature of an expedition—or an ordeal. Winter is a vise that applies pressure to the story and its characters, squeezing them until they hopefully emerge more gemlike than before.

MO: As Night Falls is split between two narratives – the story of a present day home invasion by some escaped convicts, and a family drama set decades before involving an unstable child and an equally unstable mother. How did you set the pace for each story?

JM: I remember hearing Laura Lippman—whose work I greatly admire—speak about a novel that had storylines in two distinct timeframes. Unless I’m getting this wrong (which is always a possibility), Laura said that she laid out each story separately, then wove them together once the book was finished. Me…not so much. Perhaps I’d be better off if I were that organized and meticulous! Instead I simply threw myself into the whitewater current of both stories, as I always do, and let them carry me away. When I write, I’m in something of a fugue state; I go to a different place. The place of the story. The timeline that begins in 1975 would come grab me, and boom, it’d be record players and wood-paneled station wagons. Then the plight of the family during their eight hour ordeal—the primary plotline of As Night Falls takes place over the course of a single evening—would yank me back again. There was remarkably little rhyme, reason, or order to it. For me, those things happen when I have climbed out of the book, dripping and breathless, and must turn my sights to revising.

MO: The structure of the novel impressed me quite a bit – you bring the suspense, but you also bring plenty of complex character dynamics and introspection. How did you keep the pace up while still giving the reader so much background on characters?

JM: You’ve said the words I most long to hear, so thank you, Molly. Character is as important as pacing, structure, and plot to me in a book. Because you’ve made me so happy, I am especially sorry that I don’t have a better answer to give than I DON’T KNOW. It feels as if the story gets handed to me and then the characters who would naturally people it appear. In full flesh, as they are in real life. In other words, I have little to do with it. Once my husband, who is also my first reader, asked about a plotline he found iffy. “Why did X happen?” he said, and I replied, “How should I know, it’s not like I make this stuff up!” It took his raised eyebrows to remind me…uh, yes, I do. I suppose the best response I can offer is that for me suspense is intrinsically tied to who the people are, their weaknesses and their strengths, which make them behave in ways that both put them in danger and give them the potential to survive. Character is suspense.

MO: So, I’m gonna ask this question from the midst of August in Texas. Does it really get that cold up there?

JM: Yes. Okay, okay, I’ll say a little more about this. I live a few hours south of the Adirondacks—in other words, in a warmer direction. And one morning last winter I took a bottle of vodka out of the car—it was for penne a la vodka, I swear—and it was frozen solid. VODKA, which you keep in the freezer to make nice and cold and liquid, right? Turns out it does freeze, but not until -16.5 degrees. So, yup. It gets pretty cold. There can be snow on the ground in May. That kind of climate shapes a person in fundamental ways, I think.

MO: As Night Falls has one functional family and one very dysfunctional family. Where’d you get the inspiration for the family dynamics in the novel (without giving too much away)?

JM: I was influenced by two things—a book and a profession. I’ll elaborate in reverse order. I worked as a psychotherapist for 10 years—it was my what-if-you-can’t-make-a-living-at-this-writing-thing career. And I specialized in treating children. One of the dynamics I saw cropping up was a cohort of parents who were very wary of wounding their children’s self esteem, which caused them to avoid criticizing their kids and not to get angry at them, even when the children really deserved it. Little so-and-so would be thanked for not hitting his sister over the head with a block. And what happens in response—I saw this again and again—is that the child ups the level of aggression in order to provoke a consonant response from the parents. Kids want to be stopped, they want clear limits and boundaries, and an accurate reflection of what they are doing from their trusted caregivers. As Night Falls was my effort to put this dynamic on crack. What if a parent is pathologically unable to recognize her child’s weaknesses and misbehaviors, what will such blindness lead to?

The book part comes in with Lionel Shriver’s We Need to Talk About Kevin. Shriver brilliantly explores a similar dynamic, only her rendition ends with the mightiest of tragedies. I hoped to make it come out a little happier.

Jenny Milchman joins us Monday, August 24th, to speak and sign her latest novel, As Night Falls. Copies of As Night Falls are available on our shelves and via bookpeople.com.