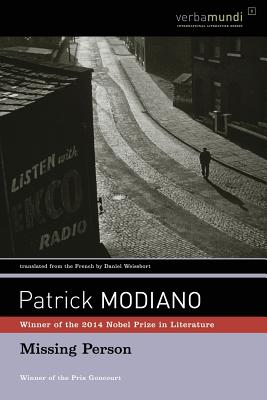 The Murder in the Afternoon Book Club meets the third Tuesday of each month at 2 PM on BookPeople’s third floor. Please join us Tuesday, August 18, as we discuss Missing Person, by Patrick Modiano.

When Patrick Modiano won the Nobel Prize for Literature in 2014, his work was little known and not widely translated in the English-speaking world. Thanks to Verba Mundi, who rushed many of his novels into print and have released them in elegant, slim volumes, we can now find out for ourselves the strength, beauty, and unease of Modiano’s prose. When I first heard Modiano’s name in connection to this prestigious prize, I looked him up to find that in addition to his many novels, he had also authored the screenplay for the French Revisionist WWII film Lacombe, Lucien, Louis Malle’s fictional follow-up to Max Ophul’s The Sorrow and The Pity.

The two films together represented a shift in French dialogue about WWII – previous to the 1960s and 1970s, French identity had relied on the preservation of the Gaullist myth, where most French had been good nationalist resistance fighters (as opposed to collaborators or communist resistance fighters). Then I found out that many of Modiano’s novels are considered detective novels, and when Modiano’s Missing Person showed up here at BookPeople in the mystery section, I couldn’t wait to choose it for one of my book clubs.

Missing Person is, from the first page, no ordinary detective novel. The novel follows a man in search of a missing person – himself. In the fog of WWII, he lost his memories, and with those, his knowledge of his self. Upon the departure of his boss, a private detective, the man decides to use the tools of his boss’ trade, left behind, to quest for his own identity. Like many WWII stories, his search for himself is also a series of revelations of lost love, overwhelming fear, stolen laughter, false identities, and desperate escape plans.

This is the first novel of Modiano’s that I have read, and I look forward to exploring his work further to find out if the same sense of unease, broken identities, and skewed, foggy reconstructions of wartime events recur throughout his work. Mitchell Abidor, in an article in Jewish Currents, writes about how Modiano’s Sephardic Jewish father survived WWII through black marketeering and shady connections. To extrapolate, perhaps this is the origin of Modiano’s obsession with compromise, guilt, and a need to address the white-washing of French reactions to German occupation.

Stylistically, while Lacombe, Lucien is a lavish, bitter, and ironic film, Missing Person is full of stripped down prose, bleak dialogue. Characters are ill at ease with themselves, their hazy attempts to reclaim memories of the past blocked by fear of what these hidden memories contain. After finishing Missing Person, I can see how the quality of Modiano’s writing catapulted him to the top of the French literary world. I can also see how awarding Modiano the Nobel Prize for Literature is also a way of recognizing his uncompromising belief in addressing the issues and unease of French history during the Occupation.