The Murder In The Afternoon Book Club meets the third Tuesday of each month at 2 pm on BookPeople’s third floor. Join us Tuesday, February 17, for a discussion of Queenpin, by Megan Abbott, who will join us via phone call during the discussion. 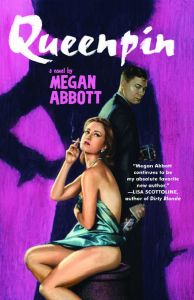 Our Murder In The Afternoon Book Club will be talking to Megan Abbott, herself The Queenpin of Noir, about her novel Queenpin, on February 17th at 2 pm on BookPeople’s third floor.

In 2007, Abbott made a splash with two books. One was the historical crime novel The Song Is You, based on the real-life 1940s disappearance of Hollywood starlet Jean Spangler. The other was her Edgar Award-winning Queenpin, a gritty and glittery expose of the mobster golden era, and our book club pick for February.

Challenging herself to write a book as quickly as possible, she did a gender switch on the mentor-protege crime novel. The narrator is a young nameless girl who cooks the books for a rundown lounge in a nameless gambling town. She’s taken out of her dead end life when Gloria Denton, a stunning older woman, walks into the place. Gloria, who has a legendary history with the town and the underworld, takes a shine to the girl. She teaches her how to dress, use men, and work the system, making her an Eliza Doolitle of femme fatales. It’s a dark heaven, until a man comes between them, risking the partnership to be damned to hell.

Under 200 pages, Queenpin packs a wallop. It’s a tight and tough with an uncompromising story and characters. Abbott’s prose style is swift, brutal, and beautiful. By changing the gender of the usual crime story, it takes an interesting look at age, beauty, and female relationships.

We’re happy to have Megan Abbott calling in to our discussion of Queenpin. We will meet at 2PM, Thursday, February 17th, on the BookPeople third floor. The book is 10% off for those who attend. Not only is Megan a great writer, she also one of the smartest minds in crime fiction. Bring earplugs or your brain might leak out of your head.

All books for BookPeople Book Clubs are 10% off during the month the club has selected the book. Learn more about BookPeople’s many book club opportunities.