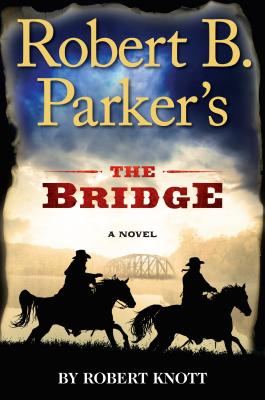 Robert B. Parker helped bring the western into the twenty-first century with  his Southwestern gunfighters Everett Hitch and Virgil Cole.  The books fit in the classic tradition of the genre while subtlety subverting it enough for a fresh take. The Bridge, Robert Knott’s third continuation in the series, proves the lawmen still have a lot of territory to ride.

The plot carries strong elements of a thriller, opening with a group of mysterious night riders creating murder and mayhem at a camp building a bridge along the Rio Blanco river. Since Appaloosa is the nearest town, Hitch and Cole are drawn into uncovering what is going on and putting their guns up against one of their most formidable opponents. They also have to deal with a group of traveling performers that come to town that include a beautiful fortune teller that Hitch gets involved with.

Knott knows just the right amount of emotion to bring to the story. Being an actor and script writer, he knows what’s not on the page is just as important as what is. He uses humor and the laconic nature of their friendship to express how his characters feel. He also gives them a group of villains that put them more on edge.

The Bridge gives us everything we love about the Hitch & Cole series, including the wonderful dry dialogue and the bond of two men who have had each others’ back in years of violent situations. Knott delivers on these and goes deeper in the authenticity of period and the characterization of the two. The two gunmen are in good hands.

Copies of the above listed books are available on our shelves and via bookpeople.com.