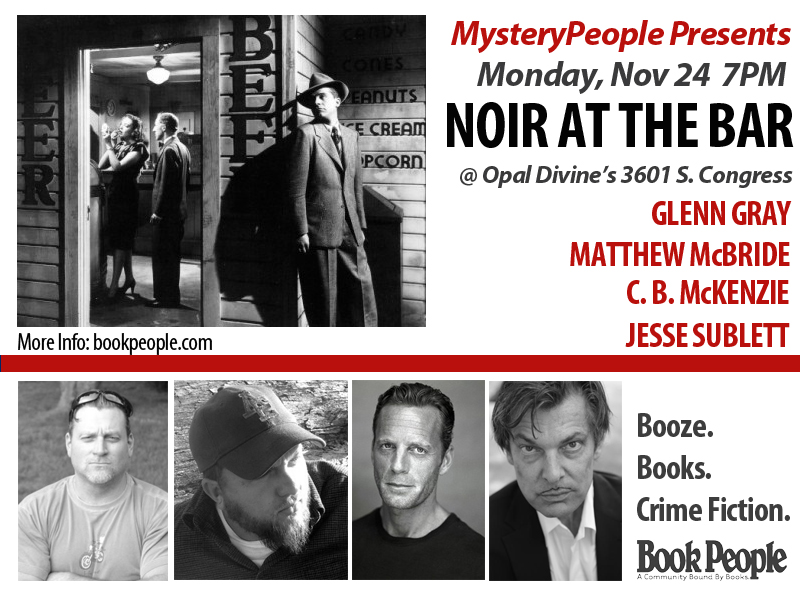 Our last Noir At The Bar of 2014 (happening tonight, November 24, at 7pm at Opal Divine’s) has us going out with top talent. The line up is composed of first offenders and hardened felons. We’ve got both rural and southwestern noir authors and a guy who mashes up so many genres that we don’t know what the hell to call him. And of course, we’ll be joined by our own Jesse Sublett

C..B. McKenzie is the recent winner of the Tony Hillerman award for Bad Country. The book introduces us to cowboy-turned-private eye Rodeo Grace Garnett. McKenzie gives a rough and tumble feel to an unromanticized American west.

Glenn Gray’s The Little Boy Inside And Other Stories has been getting great buzz. The tales, which range from crime (especially involving illegal steroid use) to sci fi to body horror, are almost always funny and disturbing. Don’t eat while Glenn reads.

Matthew McBride instantly became a MysteryPeople favorite with his gonzo hard boiled debut Frank Sinatra In A Blender. He has received more rave reviews for his intense rural crime novel A Swollen Red Sun. The book deals with the repercussions of corruption in a Missouri county overrun by meth and violence.

Austin author and musician Jesse Sublett will perform some of his murder ballads, as well as reading (his latest is Grave Digger Blues) and everyone will be on hand to sign books afterwards. Before you’re put upon by holiday cheer, join us at Opal’s and celebrate the noir side of life.