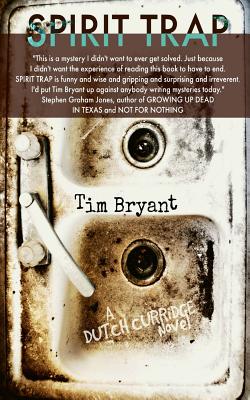 Tim Bryant’s latest book featuring post-war Fort Worth private eye Dutch Curridge, Spirit Trap, involves theft and the murder of a family, with members of a western swing band as suspects. Tim will be joining us with Ben Rheder and Reavis Wortham for our Lone Star Mystery authors panel this Wednesday, August 6, at 7 pm on BookPeople’s second floor. Tim was kind enough to answer some questions beforehand.

MysteryPeople: Music always plays a big part in the book and this time, Dutch has to deal with a lot of them in this mystery. Being one yourself, what did you want to get a across about a band?

Tim Bryant: There wasn’t a lot of planning that went into Spirit Trap. I experienced it, in some ways, as I would if I were reading it. Still, I brought my history in music to it. I would have to say what came out of that was the dichotomy that, if you look at a band from the outside, it appears very much as a family, a unit that works together. Seen from the inside out, though, it’s made up of a bunch of individuals, each of whom will have their own motives and may see what they’re doing in completely different ways. Both of those things can be useful in writing about life, especially when you’re talking about mystery.

MP: Dutch’s voice is so unique and it carries the book. How did you develop it?

TB: There’s a lot of myself in Dutch, so I didn’t have to invent him from whole cloth. Obviously, we share a dark and rather twisted sense of humor. There’s also a good bit of my grandfather in him, and  people that I remember from my grandfather’s era, men who hung around him. I have an ear for how those kinds of people talk. Not just what they say, but how they say it. I had written a series of short stories with a character called Cold Eye Huffington. Cold Eye was a good bit like Dutch, although he was set in New Orleans. The very first story I ever wrote with Dutch as a character was published in REAL literary magazine, and his voice was pretty much fully formed from the beginning.

MP: Which came first to write about, Dutch or Fort Worth?

TB: After the Cold Eye stories, I wanted to develop a Texas character, because I do consider myself to be a Texas writer. Of course, with Cold Eye, I had the whole New Orleans music scene as a backdrop, and I very much wanted to keep music in the picture. It’s something I know well and enjoy writing about, and there’s endless fodder for storylines. So, looking at Texas, and being a huge fan of both western swing music and jazz, Fort Worth became the obvious setting for Dutch. Fort Worth has such a rich music history, and a lot of people aren’t aware of just how rich it is. I mean, Bob Wills and Milton Brown are both  associated with Fort Worth, but so is Ornette Coleman. Plus, I knew that Dutch would be a little guy going up against bigger foes, and Fort Worth, always being in the shadow of Dallas, fit into that psychology.

MP: One of the things I Iike best about Dutch is his sense of humor. How important is humor in a story when you’re dealing with somber subject matter?

TB: I think it’s important as a writer and a reader to have that spark of humor there in the dark, but it only works because it’s important for Dutch himself to have that humor. It’s a survival mechanism for him, as much as anything. And he’s no longer a churchgoer, but he remembers from childhood that a joke is always funnier when you’re in a place it doesn’t belong or isn’t expected. The humor just comes naturally from what’s going on. I suppose they all come from my mind as I’m writing the story, but it honestly feels as if they come from the mind of Dutch as he goes about things. That’s what makes it natural, what makes it work.

MP: For an author, what makes Dutch Curridge a character worth coming back to?

TB: The fact that I know him like a friend. I not only know what has happened to him in the three novels, but, at this point, I know the day he was born and I know the day he dies. Elvis hasn’t arrived on the scene in the books yet, but I know what he thinks about Elvis. He’s like any friend. I may need a break from him every once in a while, because he’s pretty intense in a lot of ways, but after a while, I start to hear him whispering in my ear, and I start to miss the guy.

MysteryPeople welcomes Tim Bryant, along with Reavis Wortham and Ben Rehder, to BookPeople for a conversation about crime fiction on Wednesday, August 6, at 7 pm. His latest novel, Spirit Trap, is available on BookPeople’s shelves and via bookpeople.com.