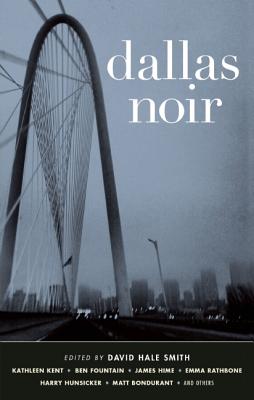 Our Pick Of The Month, Dallas Noir, is the epitome of an Akashic Noir book, featuring a range of writers who offer a wide perspective on both the city and genre. We were able to ask some questions of the collection’s mastermind, editor David Hale Smith.

MYSTERYPEOPLE: How did the project come about?

DAVID HALE SMITH: I’ve been friends with Johnny Temple, publisher of Akashic Books, for many years. In my “day job” as a literary agent representing a lot of award-winning crime fiction writers, I have a number of clients who have written stories for this noir anthology series. Jonny invited me out for a drink and popped the question. He said when it was time to do Dallas Noir, he thought of me right away.

MP: You are mainly known as a literary agent. How did that help the most in being an editor?

DHS: It was fun to wear an editor’s hat in an official capacity. And to write the book’s introduction. I’m an agent who likes to edit, as necessary, to help begin a piece of writing to top final form. I think it’s one of the most rewarding aspects of the publishing process. A few of these stories are almost to the letter as they were submitted. Some needed a bit more editorial input to make them more noir. Editing an anthology like this also means selecting the final stories for collection and putting it all together. I’m very proud of how this book turned out. Especially when our publisher picked my photo of the new Margaret Hunt Hill Bridge for the cover design.

MP: The stories are broken down into the categories Cowboys, Rangers, and Mavericks. How did you relate those titles to the stories?

DHS: My brilliant wife came up with the idea of using the three main Dallas pro sports teams as our section breaks. It fell pretty naturally after that. Cowboys are wild rides, mavericks break the rules and the rangers deal in nasty surprises.

MP: What makes Dallas a great setting for crime fiction?

DHS: As I write in my introduction, Dallas itself is like a marvelous piece of fiction. The name of the city is of questionable provenance. It’s hard to even figure out why the city exists. It’s a former frontier town turned booming business metropolis, with old forgotten neighborhoods despite a lot of dark history being paved over. People moving in from everywhere, new fortunes being made, and an entrenched old-money elite that still wields power. Perfect noir town.

MP: It seems like the tales that had characters with the least morality took place in the city’s suburbs. Why do you think that is?

DHS: The writers who chose to set stories in the suburbs picked up on the fact that those petty suburbs can serve as a veneer over some queasy stuff, especially when you let your imagination loose.

MP: What I admired most about this collection is that is showed the range of the genre and the different ways the term “noir” can be interpreted. As someone who deals with different writers in the genre, how do you define it?

DHS: Noir fiction always features massively flawed and morally corrupt (and often corrupting) protagonists. These characters are driven by lust, avarice, or jealousy. Their pursuit of their desires leads them into a figurative if not a literal gutter. Their sorry schemes inevitably go awry. Nobody emerges clean in a noir tale. Darkness pervades. That’s why I love them.